Before the T20I series, India had also won the three-match ODI rubber 2-1. 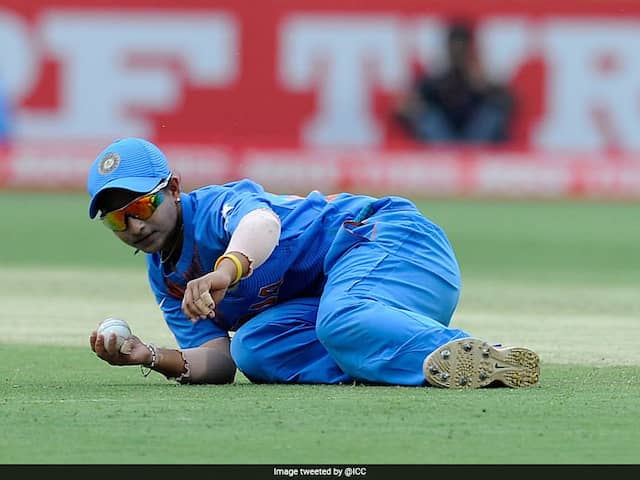 Off-spinner Anuja Patil was the pick of the Indian bowlers.© Twitter @icc

India women came out with yet another emphatic performance as they defeated West Indies women by 61 runs in the fifth and final T20I played at the Province Stadium. With the win, the Women in Blue swept the five-match series 5-0. The visitors defended the target of 135 with utmost ease as they restricted Windies to 73/7 in their stipulated quota of 20 overs. Off-spinner Anuja Patil was the pick of the Indian bowlers as she picked two wickets by conceding just three runs in her three overs. The other two spinners, Radha and Poonam Yadav, also scalped a wicket each and never allowed the Windies batters to get any sort of momentum during their chase.

Earlier, India opted to bat after winning the toss. However, they didn't have a great start as both openers -- Shafali Verma and Smriti Mandhana - went back to the pavilion after scoring just 9 and 7 respectively.

However, from there on, Jemimah Rodrigues and Veda Krishnamurthy took the mantle in their hands and stitched a 117-run stand for the third wicket. Rodrigues scored 50 runs before gifting away her wicket to Aaliyah Alleyne in the penultimate delivery of the innings. Krishnamurthy played an unbeaten knock of 57. Her 48-ball innings was studded with four boundaries.

Like India, Windies too didn't start their innings well as they lost two wickets early after Natasha McLean (9) and Chedean Nation (0) were departed cheaply by Anuja in the fourth over.

Chinelle Henry then tried to steady the ship and knitted a 15-run partnership with Kyshona Knight for the third wicket before she got out in the 10th over, reducing them to 28/3.

Hayley Matthews (2) too failed to leave a mark on the crease and was sent back by Pooja Vastrkar.

Kyshona, who contributed with 22 runs off 39 balls, was scalped by Harleen Deol in the 14th over. From there on, the hosts kept on losing wickets at regular intervals and were ultimately could reach 73/7 in the allotted 20 overs.

Before the T20I series, India had also won the three-match ODI rubber 2-1.