India crumbled against the South African bowling attack as they were bowled out for 70 in 17.3 overs. 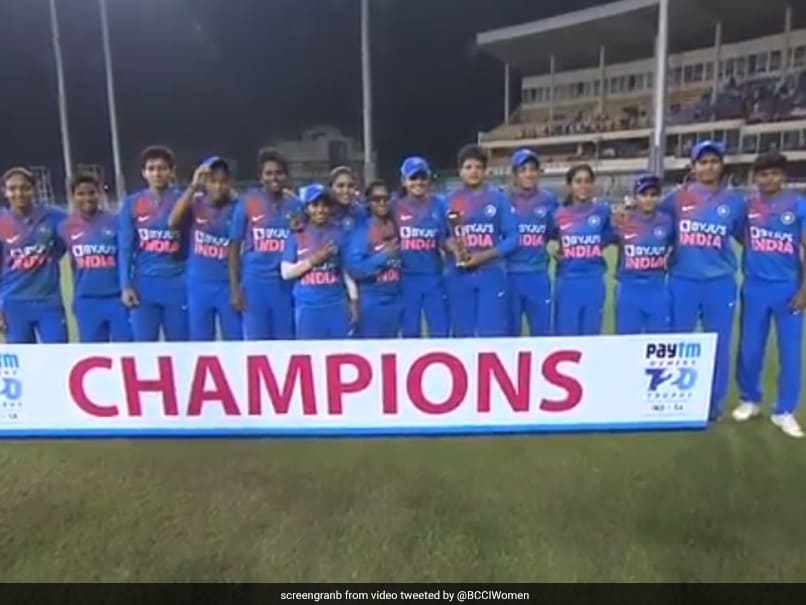 India cliched the six-match series 3-1 with two games being washed out due to rain.© Screengrab from video tweeted by @BCCIWomen

India put up a shoddy display to lose by a huge 105 runs to South Africa in the sixth and final women's T20 International, but still managed to clinch the series 3-1 in Surat on Friday. India cliched the six-match series 3-1 with two games being washed out due to rain. Electing to bat first, South Africa made a challenging 175 for three, riding on the batting heroics of openers Lizelle Lee (84 off 47 balls, 15x4s, 1x6) and Sune Luus (62 off 56 balls, 7x4s).

The duo put on a sizzling 144-run stand for the opening wicket that came off 95 balls to set the tone for the challenging score.

None of the Indian bowlers were able to trouble the South African batters with skipper Harmanpreet Kaur (1/5), Arundhati Reddy (1/28) and Poonam Yadav (1/34) sharing three wickets among them.

Chasing 176 for a win, India never got going as South Africa produced a lethal bowling effort to reduce the hosts to 13 for six after 6.2 overs.

Veda Krishnamurthy (26) and Reddy (22) showed some fightback, stitching 49 runs for the seventh wicket but once the duo departed, it was all over for India.

India crumbled against the South African bowling attack as they were bowled out for 70 in 17.3 overs.

The focus will now shift to the three-match ODI series between the two sides with the first game scheduled to be held in Vadodara on October 9.

South Africa Women Cricket
Get the latest updates on Fifa Worldcup 2022 and check out  Fifa World Cup Schedule, Stats and Live Cricket Score. Like us on Facebook or follow us on Twitter for more sports updates. You can also download the NDTV Cricket app for Android or iOS.