Shikhar Dhawan became the first Indian batsman to score a century before lunch on the opening day of a Test match. 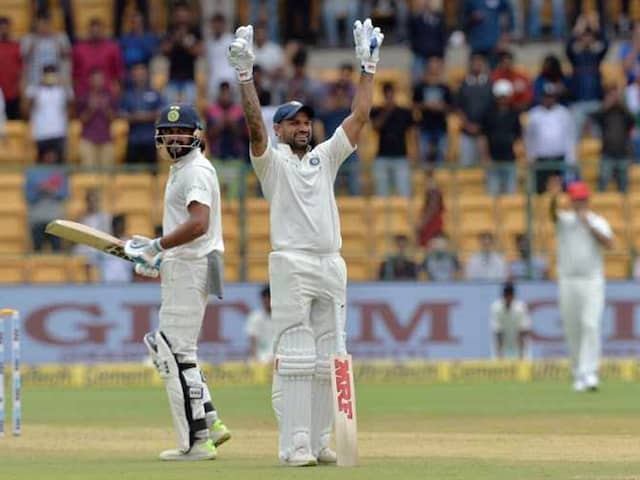 India opener Shikhar Dhawan hammered the clueless Afghanistan bowlers to register a century before lunch on the opening day of the one-off Test at Bengaluru's M. Chinnaswamy Stadium on Thursday. Stand-in India skipper Ajinkya Rahane won the toss in the morning and elected to bat and the decision bore fruit immediately as India rustled up 158 for no loss at lunch. Shikhar Dhawan was unbeaten on 104, having raced to his century off just 87 balls. However, the other opener Murali Vijay was finding the going tougher but was still around for 41 runs at the break.

Dhawan looked in sublime touch right from the start, punishing the pace duo of Yamin Ahmadzai and Wafadar for glorious boundaries before taking his SunRisers Hyderabad teammate Rashid Khan to the cleaners.

The Delhi southpaw has now become the only Indian to score a century in the opening session of a Test match. With Vijay playing a sedate innings at the other end, Dhawan looked unstoppable and got to his seventh Test ton in mere 87 balls even as the famed Afghan spin trio of Mohammed Nabi, Rashid and Mujeeb Ur Rahman seemed all at sea with this format.

Dhawan looked unperturbed even though the Chinnaswamy track offered a bit of movement for the quicks, and some spin for the slower bowlers. He took Rashid for three consecutive boundaries, including a six before launching the Mujeeb for another three back to back fours.

Earlier, electing to bat after winning the toss, the Indian openers got to their act rather effortlessly as they brought up their third century partnership in mere 20 overs.

For the visitors, none of the bowlers looked threatening, except a couple of scares, including a review of Dhawan for leg before off Rashid when the southpaw was on 94.