Chasing 275 in the final, Delhi were all out for 224 inside 45 overs with Milind Kumar and Puneet Bisht scoring 54 each. 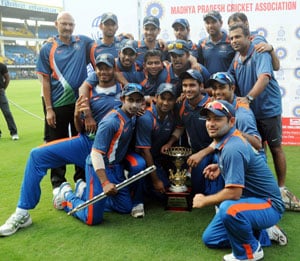 India Blue rode on a half-century by Manish Pandey and impressive bowling displays by Bhuvneshwar Kumar and R Vinay Kumar to clinch the Challenger Series for the NKP Salve Trophy at the Holkar Stadium in Indore on Sunday (September 29).

With a convincing all-round performance, Yuvraj Singh's team crushed Delhi, boasting a host of batting superstars, by 50 runs in a one-sided final in front of a huge crowd. After India Blue posted 274 for 9, Bhuvneshwar (4/39) and Vinay (3/64) restricted Delhi to 224 all out.

Choosing to bat, Akshath Reddy and Naman Ojha batted carefully to take India Blue to 51 in 11 overs, when Parvinder Awana cleaned up Ojha (33) off a thick inside edge that went on to hit the middle stump. Rajat Bhatia then ensured Delhi maintained control when he struck with his first ball to dismiss Akshath (22).

After taking a few overs to settle in, Yuvraj and Pandey took the fight to the opposition and the total to 131 when Yuvraj was adjudged leg before. Yuvraj, just settling in and making a 40-ball 29, should consider himself unlucky because replays showed the ball pitching outside leg. Bhatia, the successful bowler, continued to make inroads when he dismissed Abhishek Nayar and Pandey too to push India Blue into a corner at 178 for 5.

Piyush Chawla, at No. 7, added a crucial 46 runs with Ankit Bawne before being caught behind for a 32-ball 42 that had pushed the Blues to 257. Despite three wickets falling in the last five overs, India Blue managed a respectable total, thanks to a 13-run final over with Vinay the principal scorer. Awana ended with figures of 4 for 39 in 8 overs while Bhatia took 4 for 59 in 12.

India Blue bowlers kept the lid on the chase right from the first over. Gautam Gambhir's disappointing run continued when he was caught by Pandey off Bhuvneshwar and four overs later, Unmukt Chand failed to defend a straight delivery from the same bowler to have his off stump disturbed.

With the crowd cheering on, Virender Sehwag, batting at No. 4, got off the mark with a single and scored his first boundary after four balls. But the crowd was left stunned when Vinay sneaked a ball between Sehwag's bat and pad to knock the middle stump out of the ground.

Milind Kumar and Virat Kohli had their moments of uncertainty running between the wickets, Kohli making his displeasure at his partner's lack of response clear. It was, therefore, no surprise that Kohli was a run out victim, mainly due to Vinay's brilliance on his followthrough. In a display of great athleticism and agility, Vinay dived to his right to stop the ball, pick it up and throw down the stumps at the striker's end with an indecisive Kohli stranded.

Milind and Bhatia survived the initial spin attack, led by Chawla, to add 74 for the fifth wicket. With the batsmen scoring freely, Yuvraj brought Chawla back into the attack and it paid dividends as he dismissed both batsmen in successive overs.

Varun Sood and Puneet Bisht then dug their heels in to set up a 54-run sixth-wicket stand before Bhuvneshwar dismissed Sood lbw for 21. With 98 needed from 67 balls, Ashish Nehra responded to the daunting task with a six off his first ball. He treated the crowd to two sixes and a boundary in two overs before a mistimed shot ended his innings of 24 off 13 balls.

Although Bisht marched to a 49-ball 54, he remained the last man standing, Vinay taking the final two wickets to ensure an easy India Blue victory.

Comments
Topics mentioned in this article
Yusuf Pathan Cricket Gautam Gambhir Manish Pandey Ishank Jaggi Virender Sehwag Sourav Ganguly Rajat Bhatia Abhishek Nayar Saurabh Tiwary DEL
Get the latest updates on IPL Auction 2023 and check out  IPL 2023 and Live Cricket Score. Like us on Facebook or follow us on Twitter for more sports updates. You can also download the NDTV Cricket app for Android or iOS.