India A's push for a result could not come through as New Zealand A escaped with a draw on the fourth and final day of the first unofficial cricket Test here on Saturday. 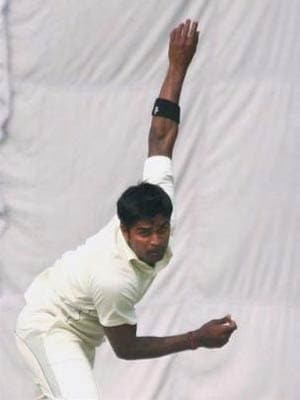 India A's push for a result could not come through as New Zealand A escaped with a draw on the fourth and final day of the first unofficial cricket Test here on Saturday.

The Indians declared their second innings at 208 for four after facing 50 overs, setting the host team a target of 314 at the Bert Sutcliffe Oval.

In reply, the Kiwis managed to sneak away with a draw in after finishing the day at 273 for eight.

Overnight 137/2, the Indians played 14 more overs and accelerated the scoring to reach 208 for four. Anustup Majumdar struck a 101-ball 58, including seven fours, and was ably supported by the middle order which picked up the pace of scoring.

Naman Ojha's 12-ball unbeaten 21, which was studded with three fours and a six, was a crucial contribution to the total.

For the Kiwis, Brent Arnel was the pick of the bowlers grabbing three for 40 in his 13 overs, including Majumdar whose dismissal prompted the Indian declaration.

Chasing the stiff target, the hosts were dealt an early blow when first innings centurion Tom Latham went back after making just 14 runs. But George Worker (89) and Neil Broom (72) helped the team recover from the blow with a solid 149-run partnership for the third wicket.

Worker took up 144 deliveries for his knock that comprised 10 fours and a six. Broom's scoring rate, however, was more brisk as he faced 94 balls and managed to strike eight fours.

At 164 for one at lunch, the Kiwis were beginning to look in the hunt for a win but the Indians got the all-important breakthrough soon after the break when Jaydev Unadkat clinched Broom's wicket.

Six overs later, Worker too made his way back to pavilion after being castled by R Vinay Kumar.

The duo's departure triggered a collapse as the Kiwi middle order failed to rise to the occasion. Luke Woodcock (26) and Sam Wells (32) came up with decent efforts but the rest of the line-up crumbled and the hosts ended up being lucky to clinch a draw.

The second match of the series will be played here from October 3.

Comments
Topics mentioned in this article
Cricket Vinay Kumar Anustup Majumdar George Worker Naman Ojha
Get the latest updates on IPL Auction 2023 and check out  IPL 2023 and Live Cricket Score. Like us on Facebook or follow us on Twitter for more sports updates. You can also download the NDTV Cricket app for Android or iOS.