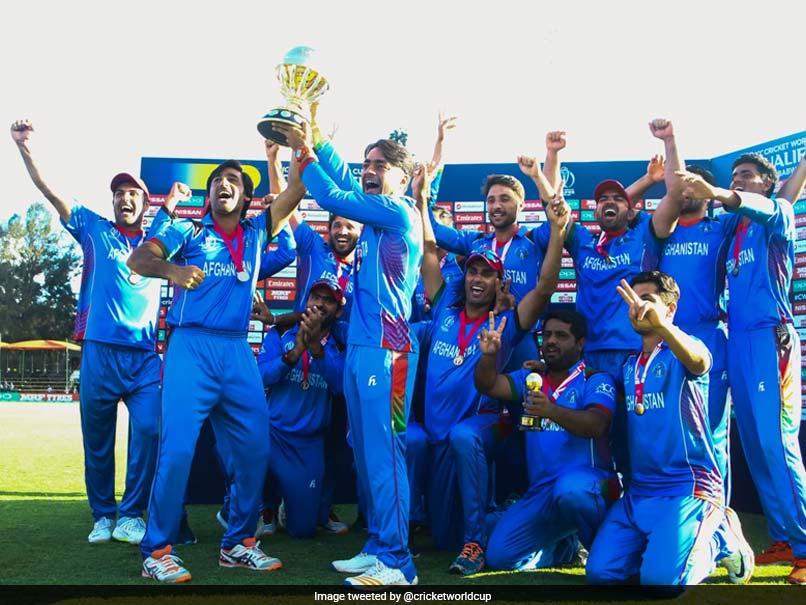 Mohammad Shahzad stole the limelight as Afghanistan laid down a marker ahead of next year's World Cup by romping to a seven-wicket thrashing of the West Indies in Sunday's qualifying final in Harare. Leg-spin sensation Rashid Khan became the fastest bowler ever to reach 100 one-day international wickets as the Windies were bowled out for 204, before big-hitting opener Shahzad smashed 84 as Afghanistan knocked off the runs with 9.2 overs to spare. Both Afghanistan and West Indies had already made sure of their places in the 2019 World Cup by topping the 10-team qualifying tournament in Zimbabwe. West Indies star Chris Gayle capped a poor personal tournament as he was dismissed for only 10 by 16-year-old leg-spinner Mujeeb Ur Rahman, who finished with 4-43.

Rashid, 19, dismissedShai Hope to take his 100th ODI wicket in only his 44th game, beating the previous record held by Australia's Mitchell Starc by eight matches.

Shahzad played some remarkable shots in his 93-ball innings, clubbing 11 fours and two sixes before holing out to the part-time spin of Gayle.

The title is also special for Afghanistan as they won five straight matches after being on the verge of an early flight home following three consecutive losses. In the past three decades, only Pakistan and Australia are the two countries who have returned from the dead to win titles. Pakistan won five straight matches to win the ICC Cricket World Cup 1992, while Australia won six matches on the trot to win the ICC Cricket World Cup 1999.

"This trophy is for the people of Afghanistan," a delighted Afghanistan captain Asghar Stanikzai said, adding: "This is nothing but a miracle that we have won this tournament. This would not have been possible without the prayers, support and well-wishes of all our fans. This title is for them.

"This is Afghanistan's by far the greatest victory. Beating the mighty Windies in the final of a tournament which is no less than a mini-World Cup, is something like a dream come true for all of us. We used to only imagine if we will ever get an opportunity to ever play against them, and now beating them twice in the same tournament is something that sits on the very top of our cricketing history," Asghar said after Afghanistan went 3-1 ahead in five matches.

"The boys have shown what they are capable of. If we have come this far in 10 years, I leave it to you to decide where we can be in the next 10 years. I will not single out any individual, it has been thoroughly a team effort where each and every player backed and supported each other in the very difficult times early in the tournament.

"I think it is a victory of self-belief and self-confidence. This victory will give us the required boost to work extremely hard over the next 14 months and like the other nine sides, will arrive in England and Wales firmly believing we can win the World Cup," an emotional Asghar, who is yet to fully recover from an appendix operation, remarked.

Windies captain Jason Holder said: "Well done to Afghanistan, especially the way they played after the group stages. Having said that, I'm proud of my boys. We came here to achieve a target, and various boys put their hands up. We had a quick turnaround between games, but I'm proud of them for sticking in. Obviously disappointed not to win this final but we had some great performances throughout. I want to thank my team for their support."

Earlier, the Windies innings never reached the take-off point as they continued to lose wickets at regular intervals. No.7 batsman Rovman Powell finished as the top scorer with a 75-ball 44, while Shimron Hetmyer (38), Evin Lewis (27), Ashley Nurse (26 not out) and Shai Hope (23) were the other batsmen to cross the 20-run mark.

Mujeeb was once again the destroyer in chief of the Windies' batting. Opening the bowling, he immediately put the Windies on the back foot when he accounted for Chris Gayle, before picking up three wickets in his 10th over to finish with four for 43.

Gulbadin Nain snapped up two for 28, while Dawlat Zadran, Sharafuddin Ashraf and Rashid Khan picked up a wicket apiece, but most importantly didn't allow the Windies batsmen to change gears.

In turn, Shahzad played someexciting strokes to all parts of the park as he single-handedly put his side on course for a comfortable victory when he scored 84 off 93 balls with 11 fours and two sixes. He put on 58 runs for the first wicket with Gulbadin and added 90 runs for the second wicket with Rahmat Shah.

After Shahzad's departure, Gayle also accounted for Rahmat Shah (51, 78b, 4x4) but it was too late as Afghanistan achieved the victory target for the loss of three wickets in 40.4 overs. Seasoned all-rounder Mohammad Nabi finished with a flourish, clobbering Gayle for three consecutive sixes to the cheer of his enthusiastic team-mates.

Comments
Topics mentioned in this article
Afghanistan West Indies Cricket Team Rashid Khan International Cricket Council Cricket
Get the latest updates on SA vs IND 2021-22, check out the Schedule and Live Score . Like us on Facebook or follow us on Twitter for more sports updates. You can also download the NDTV Cricket app for Android or iOS.