The India women's cricket team in is enjoying an eight-day break before the limited-overs series against England. 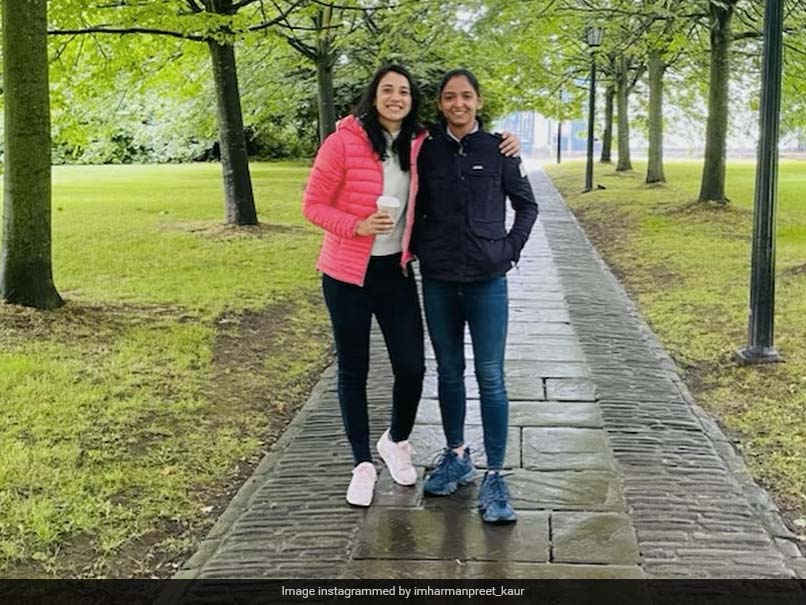 Harmanpreet Kaur posed with Smriti Mandhana for a pic during their break in Bristol.© Instagram

India cricketer Harmanpreet Kaur is enjoying some free time following the conclusion of the one-off Test between India Women and England Women. The four-day Test match, which was played at the Bristol County Ground, ended in a draw on Saturday. Now, the women in blue are enjoying an eight-day break before their limited-overs series against England. And it seems India's T20 skipper is in love with the captivating beauty of Bristol. On Monday, Harman shared several pictures with Smriti Mandhana and veteran India seamer Jhulan Goswami on Instagram and captioned the post, "Snippets from a Bristol eve." The Moga girl also used a red heart emoji.

The post was a big hit on Instagram, garnering over 75,000 likes within a few hours of being posted.

Responding to the post, England pacer Kate Cross asked Harman, "Have you warmed up yet?" In reply, Harman said, "I hope so." Kate was probably referring to Harman's poor outing in the solitary Test against England, where she failed to touch the double-digit figures in both innings. The batter scored 4 runs off 11 balls in the first innings and managed to score 8 runs off 34 balls in the second.

The Indian team will hope for a better performance from Harman when they kick off the 3-match ODI series on June 27. The opening ODI match will also be played at the Bristol County Ground. After that, Team India will travel to Taunton and Worcester for the second and third ODI matches, respectively.

After the conclusion of the ODI series, India will take on England in a three-match T20I series, starting on July 9.

England Women Harmanpreet Kaur Smriti Mandhana Jhulan Goswami Cricket
Get the latest updates on Olympics 2020, Olympics 2020 Medal Tally , Live Cricket Score . Like us on Facebook or follow us on Twitter for more sports updates. You can also download the NDTV Cricket app for Android or iOS.