Hardik Pandya was seen feeding son Agastya in a heartwarming picture, with the duo reunited after four months. 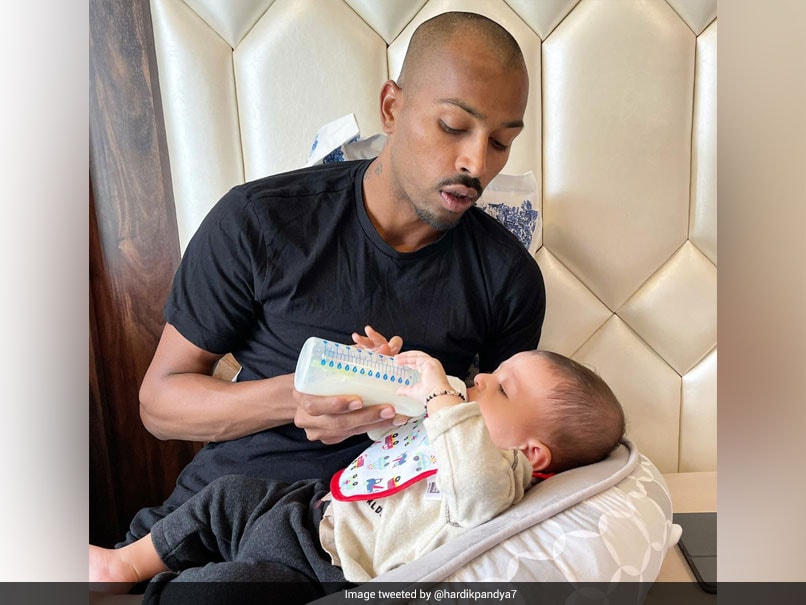 Hardik Pandya became a father on July 30 this year.© Twitter

Team India all-rounder Hardik Pandya took to Twitter on Saturday to share a heartwarming picture, where he can be seen feeding son Agastya. Hardik is reunited with his son, after a period of four months. The 27-year-old has been swamped with competitive cricket in the last few months, representing defending champions Mumbai Indians in the Indian Premier League (IPL) 2020 initially. This was followed by Hardik's involvement in the limited-overs leg of the ongoing Team India's tour of Australia. "From national duty to father duty," the Indian all-rounder captioned the picture on social media.

Hardik became a father on July 30 this year, but had to leave for the United Arab Emirates (UAE) where the IPL 2020 was being conducted within less than a month. Having spent over two months in the bio-bubble with MI, the all-rounder travelled to Australia where he featured in three ODIs and same number of T20Is.

The 27-year-old was one of the top performers for the visitors, making his presence felt with the bat. Hardik was the highest run-scorer for Team India in the 50-over format, smashing 210 runs in three games at an average of 105.

He was further an impactful performer in the T20I series, leading the visitors on to a triumph in the 2nd game which turned out to be the series decider.

Hardik smashed an unbeaten 42 in the game at the Sydney Cricket Ground, and was eventually named as the Man of the Series.

Team India will next take on Australia in a four-match Test series. Skipper Virat Kohli will be going back home at the end of the first match, having been granted paternity leave by the Board of Control for Cricket in India (BCCI).