Harbhajan Singh and Shikhar Dhawan took to Twitter to wish their fans on the occasion of Holi. 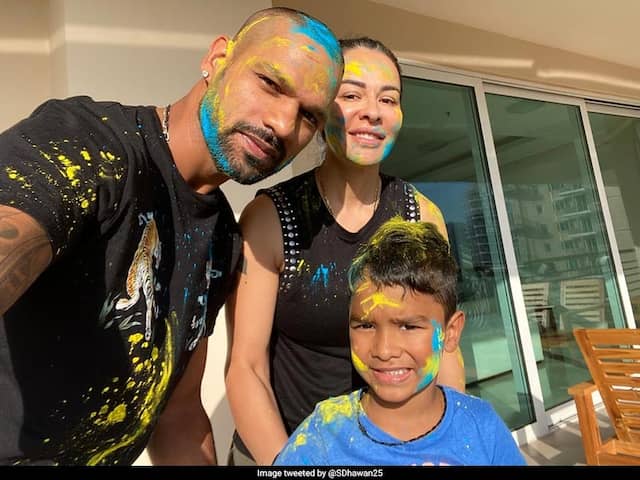 Shikhar Dhawan posted a picture with his family on Twitter to extend wishes on the occasion of Holi.© Twitter

Harbhajan Singh, veteran India off-spinner, led the celebrations on social media on the festival of Holi by posting a picture with his family on Twitter on Tuesday. "Happy Holi Everyone," Harbhajan Singh captioned the image on Twitter. Shikhar Dhawan, who was recently included in the 15-member India squad for the upcoming One-Day International (ODI) series against South Africa, also took to Twitter to post a picture while wishing his fans on the occasion of Holi.

Harbhajan's teammate from Chennai Super Kings Deepak Chahar also posted a couple of pictures on the occasion of Holi on Instagram to extend his wishes on the festival of colours. Harbhajan Singh and Deepak Chahar will be seen playing together in the upcoming edition of the Indian Premier League (IPL), starting March 29.

India are scheduled to host South Africa for a three-match ODI series before the 13th edition of IPL kicks off.

There were speculations that the IPL might get postponed due to the coronavirus fears but the Board of Control for Cricket in India (BCCI) secretary Sourav Ganguly confirmed that the IPL is "on" and the board will take all the necessary steps required.

Shikhar Dhawan Deepak Chahar Cricket
Get the latest Cricket news, check out the India cricket schedule, Cricket live score . Like us on Facebook or follow us on Twitter for more sports updates. You can also download the NDTV Cricket app for Android or iOS.