"Don't Want To Be Tagged As The Guy Who Isn't A Team Man": Hanuma Vihari

Hanuma Vihari is the first batsman to score three successive centuries at the Irani Cup. 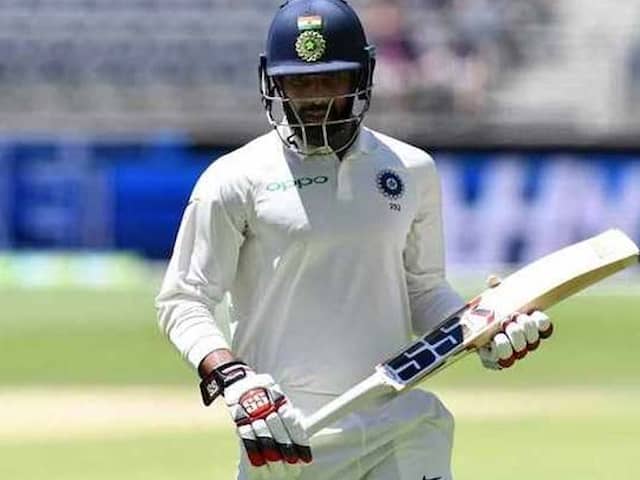 Hanuma Vihari will be playing for the Delhi Capitals in the upcoming Indian Premier League.© AFP

Hanuma Vihari, who has been in and out from the Indian Test team since his debut against England at The Oval last year, has hit form recently. Playing for Rest of India, he became the first batsman to score three successive centuries at the Irani Cup, all the three coming against Ranji Champions Vidarbha. Vihari, who will be playing for the Delhi Capitals in the upcoming Indian Premier League (IPL), wants to give his best for his team whether it is India or Delhi Capitals.

Vihari, who is most comfortable in the middle order in Tests but won't mind facing the red cherry at the start of an innings if asked to do so once again.

"Yes, I will do whatever is needed for the team. These are situations you face as a sportsman, and you have got to learn to accept it. Whether it's playing for India or Delhi Capitals, I don't want to be tagged as the guy who is not a team man. I want to be out there for our team," Vihari said with conviction.

The Delhi Capitals have a star-studded top order with Shikhar Dhawan, Prithvi Shaw, skipper Shreyas Iyer and the indomitable Rishabh Pant in the ranks.

Vihari knows it will be a fight to get into the playing XI but he is ready to don the role of a finisher the same way he agreed to open for India in unfamiliar conditions in Melbourne.

"Honestly, given that I am playing the IPL after a three-year gap, I am ready to go out there and bat anywhere the management asks me to, whether it's at the top of the order, or in the role of a finisher.

On my part, I am really in a great mental space and a great position as far as my game is concerned. I am really well-prepared for everything right now," the 25-year-old Andhra batsman said.

He was a part of SunRisers Hyderabad in 2013 but a lot has changed since then. He has scored loads of runs for India A and also struck a fifty against England on his Test debut. "I am excited, and fully ready for the season ahead with Delhi Capitals. Mainly because in these three years, I have developed so much as a player.

"I am much more confident of performing now. Also, we have a great mix of Indian and foreign players. I am really looking forward to playing under Shreyas and Ricky's (Ricky Ponting) leadership," Vihari said.

Delhi Daredevils Cricket
Get the latest updates on IPL 2020, check out the IPL Schedule for 2020 and Indian Premier League (IPL) Cricket live score . Like us on Facebook or follow us on Twitter for more sports updates. You can also download the NDTV Cricket app for Android or iOS.