The 52-year-old Graham Ford has signed a three-year deal and will join the English County club in February when his contract with the Sri Lanka team ends. 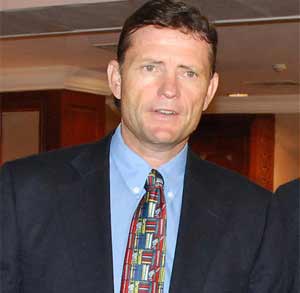 South African Graham Ford has been appointed new head coach of Surrey, the English county side confirmed on Monday.

The 52-year-old has signed a three-year deal and will join the club in February when his contract with the Sri Lanka team ends.

He replaces Chris Adams, who was sacked last June after the club were relegated from Division One of the County Championship.

"I am delighted to once again be involved in the English cricketing system," said Ford.

"I have, for a long while, been an admirer of Surrey CCC and see it as a great privilege to be actively involved in such a fine club.

"I look forward to the exciting times ahead!"

Ford will work alongside club board member Alec Stewart, who is to take on the role of director of cricket.

He will also join fellow South African Graeme Smith at the Kia Oval with the long-serving national skipper having been re-signed, as club captain, for 2014.

The move will also see him link up again with England batsman Kevin Pietersen, whom he has known since his school days.

Ford started coaching in 1992 and won domestic honours with Natal before moving up to international level with South Africa in 1999.

He joined Kent in 2005 and later returned to Natal before taking charge of Sri Lanka in January last year.

Comments
Topics mentioned in this article
Cricket Graham Xavier Ford
Get the latest updates on ICC T20 Worldcup 2022 and CWG 2022 check out the Schedule, Live Score and Medals Tally. Like us on Facebook or follow us on Twitter for more sports updates. You can also download the NDTV Cricket app for Android or iOS.