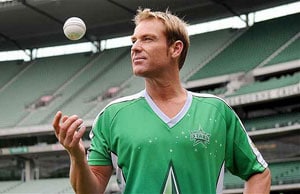 Australia's Twenty20 Big Bash season has begun in glitzy style, with LED stumps and bails flashing on impact and helmet cameras on batsmen.

Shane Warne's Melbourne Stars and cross-city rivals Melbourne Renegades opened the series at half-full Etihad Stadium late on Friday when the technological innovations were unveiled for the first time.

The Australian-designed Zing Wicket System has a sensor in the bails that can determine within one-thousandth of a second when the wicket is broken.

Once the wicket is broken the bails instantaneously flash bright red LED lights and then send a radio signal to the stumps which also flash.

They are powered by low voltage batteries in each of the bails and also in the stumps.

"These light-up stumps are all about enhancing the spectator experience during BBL matches and ensuring that the BBL remains highly entertaining for the fans," BBL senior manager Anthony Everard said.

"This is exciting to have a world-first product being used in the T20 BBL."

This season's matches will also feature a helmet camera on batsmen and wicket-keepers to give fans a close-up look at the action.

"I might be having a crack at that (helmet cam)," Australian Test batsman Shane Watson said.

"As long as it doesn't impair your vision of being able to see the ball, I think it will be great to see what we go through.

"Hopefully the viewer will see through our eyes what we are taking on."

Warne suffered the humiliation of conceding an Australian T20 record of 0-41 from his two overs as his Stars were upset by the Renegades.

Warne's team batted first and made 167 for five, only for the Renegades to take to the 43-year-old legspin great in their innings for four sixes as they reached 168 for two with 10 deliveries to spare.

Comments
Topics mentioned in this article
Cricket Alex Hales Faf du Plessis Marlon Samuels Shane Warne Lasith Malinga Luke Wright SYS Isaac Vivian Alexander Richards
Get the latest updates on India vs South Africa and check out  Schedule, Results and Live Score. Like us on Facebook or follow us on Twitter for more sports updates. You can also download the NDTV Cricket app for Android or iOS.