Glenn McGrath has said that Australias pace attack need to be fierce to reclaim the No.1 Test ranking, currently held by South Africa. McGrath, who was officially inducted into the Bradman Foundation, spoke at the Foundations annual dinner at the Sydney Cricket Ground. 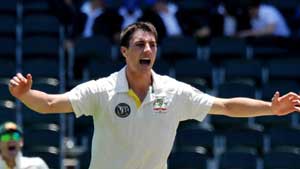 Glenn McGrath has said that Australia's pace attack need to be fierce to reclaim the No.1 Test ranking, currently held by South Africa. McGrath, who was officially inducted into the Bradman Foundation, spoke at the Foundation's annual dinner at the Sydney Cricket Ground.

"Towards the end of my career you got used to the fact you were playing in a squad of 20, not a team of 11," McGrath told News Limited.

"You need to have that mentality and I think that's what we (Australia) need to do. I think that will also give a bit more security to the players as well."

Following Pat Cummins' recent injury scare, McGrath said the Australian team should develop a squad mentality to ensure that players are fit. Cummins, 19, made a spectacular Test debut against South Africa last year but has been plagued by injuries ever since.

He was part of the Sydney Sixers team that won the Champions League Twenty20 in South Africa, but may miss out on first-class games over the next few weeks as the result of a back problem. "I'm not sure what's happening with Pat," said McGrath. "I'm not sure whether it's his action, bowling too much when he's young or something else.

"It's a shame because I was watching him bowl just recently in the Twenty20 World Cup and he looked very impressive. I'm not sure why there are so many injuries these days, whether it's the amount of cricket or the type of training? I don't know."

McGrath, who had a remarkably injury-free career, said that a lack of cricket as a teenager may have worked in his favour. He claimed 563 wickets in 124 Tests in a career that began in 1993 and ended only with a third successive World Cup win in 2007.

"I was a bit of a late starter so there were a lot of things that probably held me in good stead," he said. "I didn't bowl a lot when I was younger, I was just playing in the bush, so whether that allowed my body to finish growing without the stresses of too much cricket, I don't know."