Gautam Gambhir, who was a DDCA director until last month, slammed the authorities for infighting and not putting their energy into betterment of Delhi cricket. 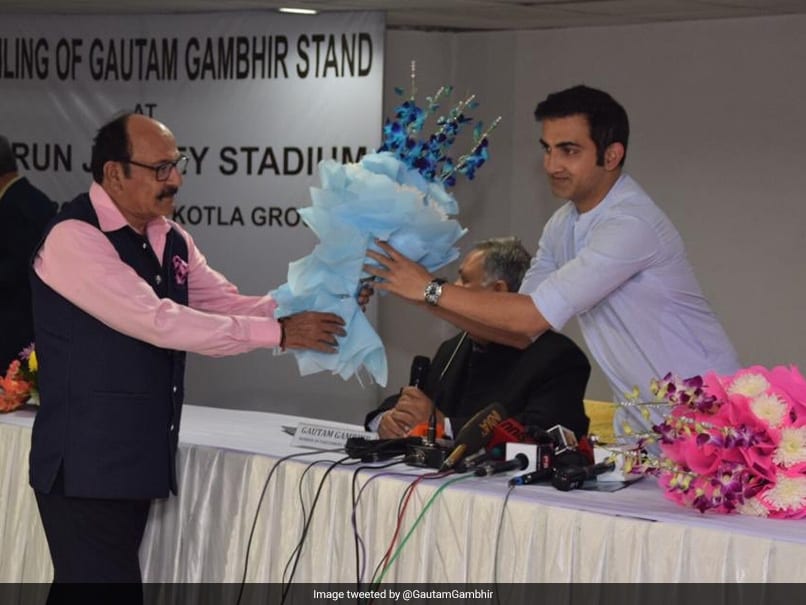 The North Stand at the Arun Jaitley stadium was named after Gautam Gambhir.© Twitter

Gautam Gambhirfinally saw a stand named after him at the Arun Jaitley stadium in Delhi on Tuesday but the felicitation became more of a sideshow with the former India opener lamenting the current mess in DDCA and even questioning president Rajat Sharma. Administrative chaos has come back to Delhi cricket again with president Sharma pitted against the apex council. The senior journalist was appointed president in July last year, when elections were held for the first time since 2013. He resigned earlier this month but the Ombudsman put his resignation on hold and asked him to continue. Gambhir, who played all his domestic cricket for Delhi and was also captain for a long time, rued the state of affairs in DDCA.

He also questioned president Sharma for the delay in naming the North Stand after him.

"I think the president can answer this question better because earlier I was told that stand will be unveiled during the India versus Australia game (in March), then they said it will be the first game of the IPL, they they said the hot weather (local tournament). This was what was told to me in the last six to seven months," Gambhir said in response to a PTI query.

Sharma was not present on the occasion. Current India captain Virat Kohli also has a stand named after him at the Kotla, alongside greats such as Mohinder Amarnath and Bishan Singh Bedi. Virender Sehwag has a gate named after him and so has former India women's team captain Anjum Chopra.

In a no-holds-barred interaction, Gambhir, who was a DDCA director until last month, slammed the authorities for infighting and not putting their energy into betterment of Delhi cricket.

He claimed that Jain never played for Delhi and should have never been appointed as selector.

"I had raised that point when I was DDCA director but it did not change anything and hurt me a lot. There are many ex-Delhi players who can contribute so much to the game," said Gambhir who played 58 Tests, 147 ODIs and 37 T20 Internationals for India.

The 38-year-old claimed that none of his suggestions were taken seriously when he was part of the apex council.

"We had (court-appointed) administrators running the game for so long and then we had elections and again it is a divided house now. At the end of the day, young cricketers suffer most from all this.

"You can't work with your ego, it can spoil careers of young and talented players. People in DDCA will come and go but the cricketers should not suffer. All the elected members should work as a team."

On his suggestions not being taken seriously, Gambhir added: "My input was nothing for one year (as DDCA director). I had good suggestions like we should have scholarship for 100 cricketers who don't have jobs. We don't want them going to Railways or Services.

"I suggested an increase in daily allowance, indoor nets at Kotla, we need them because of the extreme climate in Delhi. Nothing happened there also.

"The most basic suggestion was change the pitch square but no action was taken on that also. Last IPL Delhi pitch was being criticised for being slow. Now another IPL is approaching and nothing has happened."

Gautam Gambhir Cricket
Get the latest updates on ICC T20 Worldcup 2022, check out the Schedule and Live Score. Like us on Facebook or follow us on Twitter for more sports updates. You can also download the NDTV Cricket app for Android or iOS.