Game of cricket will be poorer without Sachin: Pakistan media

Although nothing much has been written in the Urdu press but the English dailies has taken exception to Tendulkar's decision to retire from international cricket next month after playing his 200th Test match and described him "the greatest postwar batsman to have played the game". 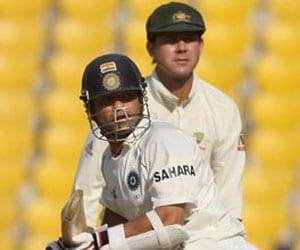 The Pakistan English press has showered heap of praise on legendary Indian batsman Sachin Tendulkar in their editorials, saying "the game of cricket will surely be poorer without him".

Although nothing much has been written in the Urdu press but the English dailies has taken exception to Tendulkar's decision to retire from international cricket next month after playing his 200th Test match and described him "the greatest postwar batsman to have played the game".

Dawn wrote Tendulkar's retirement marks the end of a truly memorable career that spanned nearly a quarter of a century.

"Rated by critics and contemporaries as arguably the greatest postwar batsman to have played the game, Tendulkar continued to rewrite the record books with his brilliant batting skills since making his debut against Pakistan in Karachi way back in 1989," an article in the newspaper said.

"His 100 international centuries and over 15,000 Test runs are records that are unlikely to be surpassed for many years. Tendulkar, now 40, enjoys the status of a demigod in India. It is to his credit that he never allowed success to go to his head at any point during his illustrious career, staying away from needless controversies. His image remains impeccable, both on and off the field, a rare feat in an age when the game of cricket has been dogged by scandals.

"Tendulkar's success has inspired a generation of talented players including Rahul Dravid, Virender Sehwag, Sourav Ganguly, Virat Kohli and Shikhar Dhawan. It is true that his cricketing skills did not quite translate into leadership qualities and that he enjoyed only moderate success as team captain of India.

"Moreover, he struggled for form in recent years, which led to calls for his retirement so that new players could be inducted. These shortcomings notwithstanding, Tendulkar has always attempted to give his best to the Indian team each time he walked onto the field - this fact alone speaks volumes for both his playing skills and his integrity. His best moments have included his contribution to India's 2011 World Cup triumph. The game of cricket will surely be the poorer without Sachin Tendulkar," the article added.

The Express Tribune and Daily Times wrote Tendulkar is rightly considered the most complete batsman of his age, possessing every shot in the book and having the ability to both, tear apart bowling attacks and to control his natural aggression to suit the needs of his team. The Tribune further said a quick glance at the statistics Tendulkar compiled over his career make for mindboggling reading: over 34,000 international runs, the only player to score 100 international centuries, as well as being the leading Test and ODI run-scorer. "Adversity seemed to bring out the best in the Little Master, with some of his most memorable knocks coming when India were in dire straits or when he was trying to get back into form after a string of poor scores.

Other memorable knocks that Pakistanis are sure to remember will be his brave 136 in the 1999 Chennai Test and his stupendous 98 in the 2003 World Cup clash between the archrivals," said an article in The Express Tribune.

"With runs having dried up for the maestro in recent times, there had been a growing belief that he may just have overstayed his welcome. Nevertheless, there is no doubt that Tendulkar will be greatly missed, not just by his countrymen, but by cricket fans the world over," it said. Insaaf, an Urdu daily, said Tendulkar like cricketers are not born evey day.

"His is widely loved and respected. His fans must be sad as cricket without him is surely be poorer."