Freddie undergoes one more surgery to play football with kids

After spending three years on crutches, former England all-rounder Andrew Flintoff has undergone a major surgery to straighten his left leg, which cut-short his cricketing career at an early age of 31. 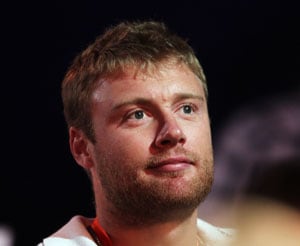 After spending three years on crutches, former England all-rounder Andrew Flintoff has undergone a major surgery to straighten his left leg, which cut-short his cricketing career at an early age of 31.

"I basically had my leg completely straightened," said Flintoff.

"After the 2009 (Ashes) series my knee was in bits, so I had the micro-fracture done the day after the Oval Test match but it was pretty clear I wasn't getting any better. I was getting on with the rehab but I was kidding myself that I was getting better."

"My whole left leg had started to bow and I needed this latest operation to try and make sure I can lead some kind of normal life," the 33-year-old added.

Having already gone through 13 surgeries in an injury ravaged career, the former captain said he now wants to lead a pain-free life. "I want to be able to play football with my kids or, if I wanted to play a game of club cricket with my brother, I could do it. More than that, I just don't want to walk in pain."

Flintoff, who has spent a total of three years on crutches during recovery from a succession of serious knee and foot injuries, however, has no regrets about pushing his battered knee to play through the 2009 Ashes. "I would never swap winning the Ashes but that 2009 series finished my career. I played through four Tests and the damage I did then has resulted in how I am now. I certainly never thought I would play my last game of cricket aged 31."

"I had so many injections and pain killers in my knee just to get through that series. I'm glad I did but obviously it has cost me," Freddie told The Wisden Cricketer magazine.

The cricketer admitted that it has been difficult to find motivation without the prospect of ever playing for the country again. "I'm not going to lie, I have found it incredibly tough. It's really hard to motivate yourself knowing that at the end of it you're still not going to get a chance to play for England again," admitted Flintoff.

Comments
Topics mentioned in this article
Cricket Andrew Flintoff
Get the latest updates on ICC T20 Worldcup 2022 and CWG 2022 check out the Schedule, Live Score and Medals Tally. Like us on Facebook or follow us on Twitter for more sports updates. You can also download the NDTV Cricket app for Android or iOS.