Speaking on the performances of the young Indian boys in the U19 World Cup, former India chairman of selectors MSK Prasad said right-handed batter Shaik Rasheed can be the one for the future. 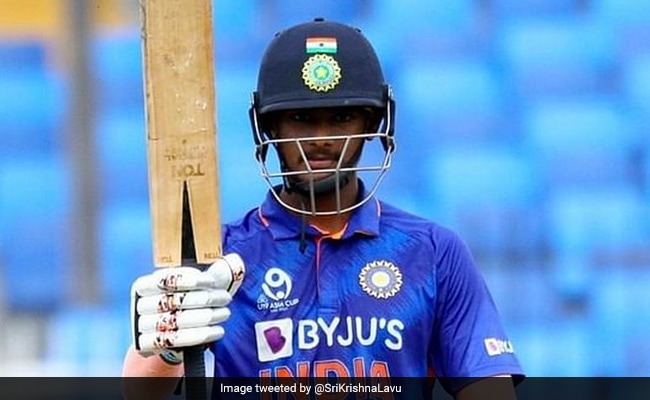 India beat England in the final to lift the U19 World Cup for a record-extending fifth time on February 5. There were many notable performances throughout the tournament from the Yash Dhull-led side. The batting display of Angkrish Raghuvanshi, Shaik Rasheed, Yash Dhull, all-round performances from Raj Bawa, Rajvardhan Hangargekar, fine efforts with the ball from Vicky Ostwal and Ravi Kumar gave a clear indications that Indian cricket's future is bright. Speaking on the performances of the young Indian boys in the recently-concluded U19 World Cup, former India chairman of selectors MSK Prasad said right-handed batter Shaik Rasheed can be the one for the future. Prasad even went on to add that Rasheed can be India's "future No. 3" in both red and white-ball cricket.

"He can be our future No. 3 in red ball and white ball cricket," Prasad told Cricbuzz.

17-year-old Rasheed played a superb knock of 94 against Australia in the semi-final and was also India's top-scorer in the final with a fine half-century. The talented right-hander, who has a solid technique and can press the accelerator when required, batted at No.3 for India in the U19 World Cup in the matches that he was available for selection - Rasheed was one of the cricketers who had to miss a couple of matches after testing positive for COVID-19.

Prasad found Rasheed's temperament to be the "most impressive" aspect of Rasheed's batting.

"He likes to score in front of the wicket and bats late, giving himself sufficient time to play the ball. Those are very good qualities. What was most impressive was his temperament. He never looked rattled when India were under pressure," Prasad said.

Rasheed has been a consistent performer at the U19 level and also in domestic age group cricket. He had scored 376 runs in 6 innings for Andhra in the Vinoo Mankad Trophy at an average of 75.2. He scored a ton in the Challenger Trophy (119), also struck an unbeaten 90 against Bangladesh in the Asia Cup Semi-final and scored 72 not out in practice match against Australia before the World Cup.

India U19 Cricket
Get the latest updates on India vs Australia and check out  Schedule, Results and Live Score. Like us on Facebook or follow us on Twitter for more sports updates. You can also download the NDTV Cricket app for Android or iOS.