Mithali Raj said as the ODI captain she will bring the team together. 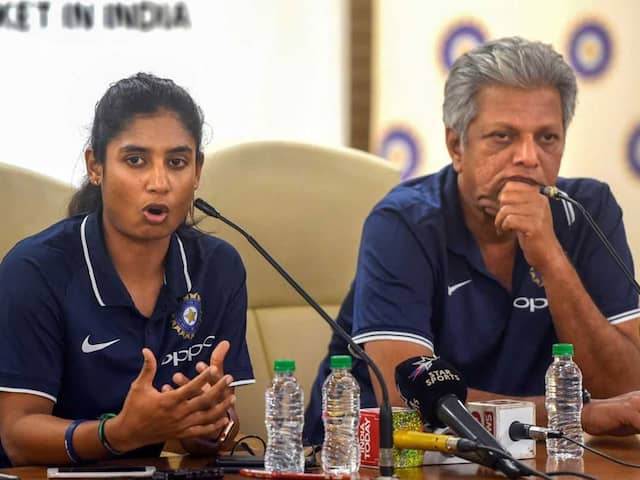 Mithali Raj's differences with ousted coach Ramesh Powar and CoA member Diana Edulji is a thing of past and she is gearing up to make a "fresh start" under new coach WV Raman with the upcoming tour of New Zealand. The women's team was at the centre of a huge controversy after their semi-final exit in the T20 World Cup in the West Indies as Raj accused previous coach Powar of bias and CoA member Edulji of trying to finish her career. "I think it's a fresh start. Coming into the new year, this is the first series and yes we have moved on from that (controversy)," ODI skipper Mithali told reporters during the team's pre-departure press conference in Mumbai on Sunday.

Mithali is confident that Raman's experience as a coach would make a difference and she will be on the "same page" with the former India opener.

"When a coach comes in the national side, we as a team are very vocal and expressive as to what is required for the benefit of the team. The coach and the players will have to be on the same page, because that's very important."

While this will be her first stint under Raman, she is confident that it will be onwards and upwards from here on.

"I have not trained under him (Raman) but met him a couple of times and if you see his credential, he has played (at the highest level) and coached various teams at various levels.

"So he comes with that and there are no expectations as such when you have credentials like that. You are only positive that the coach will make a big difference to the team, getting into the year and to the series," the star batter exuded confidence.

Mithali also acknowledged that all coaches have played a part in shaping up the team.

"I honestly believe every coach like how very captain has a very different take. They bring very different perspective to the table, so does the coach.

"The team what it is today, is because of all those various coaches, who trained the team in these years. The team has come so far and his (Raman) knowledge will only benefit the team to go further and above, to move forward," she added.

Mithali also stressed that as the ODI captain she will bring the team together.

"At this level, every player understands what it takes to reach this level and what it takes as a team to play, go on an overseas tour, aim to win the series and gain those (ICC ranking) points.

"So even though we (coach-captain) might have difference of opinions, but when it comes down to players, as a team, we sit and discuss," the skipper said.

Mithali is hopeful that she can bring the team together against the 'White Ferns' during the upcoming tour, one of the toughest assignments in recent times.

"Individual brilliance can win you matches but if you have to win the series, you need every member, every core member of your team to perform and that performance has to compliment the team's goal. I believe I will be able to get the team together again and that is what we are going to work on," she added.

Raman, on his part, said the women's team reaching finals of the ODI World Cup was an indication of its talent.

"They almost won the World Cup in England, which is one of the reasons I put my hat into the ring. That to me was an indication that there is great talent. They are capable of going places and that is what I am going to be looking at - as to how to guide them to play as well as they did in the last 18 (months), hopefully better than what did they in the last 18 months.

"They have set a high standard - it augurs well - and everybody should be looking towards doing much better," Raman said.

Raman also said this was a crucial phase for the women's team.

"This is a stage where they can really sky-rocket or if things do not go well, things can really go down south. At this point I thought they would require somebody with experience and also somebody who has seen a gamut of teams and performed various roles. They needed somebody like that to guide them. I fancy myself and that's the reason here I am," he stressed.

Talking about her future, Mithali said she would take one series at a time.

"I do not know where I would be 2-3 months from now; I cannot really predict whether I will be part of the T20 World Cup. For me at this juncture this New Zealand tour is as important, very important in fact (as to) how it goes for the team and for me."

And did Mithali ever-think of quitting from T20 and the reply was negative.

"Whatever has happened is off the field and I believe whenever I take that decision it probably will be because of my own reasoning and about my own game," she stressed.

Mithali and T20 skipper Harmanpreet Kaur had differences of opinion, but according to Mithali, the two have moved on.

"We (She and Harmanpreet) did meet up after what happened and I think both of us have moved on. I guess too much emphasis is given to that controversy, it was last year and all of us should look forward to 2019," she emphazised.

The ODI skipper also noted that the controversy did hamper the women's cricket.

"I do not know how controversies help the profile of the sport. I believe when a lot is being spoken about non-cricketing things it is not so good," she signed off.

India Women Mithali Raj Cricket
Get the latest updates on IPL 2020, check out the IPL Schedule for 2020 and Indian Premier League (IPL) Cricket live score . Like us on Facebook or follow us on Twitter for more sports updates. You can also download the NDTV Cricket app for Android or iOS.