England Women vs India Women, Only Test Day 1: Heather Knight's 95 and Tammy Beaumont's 66 took England to 269 for 6 even as India made a comeback with wickets late on the first day. 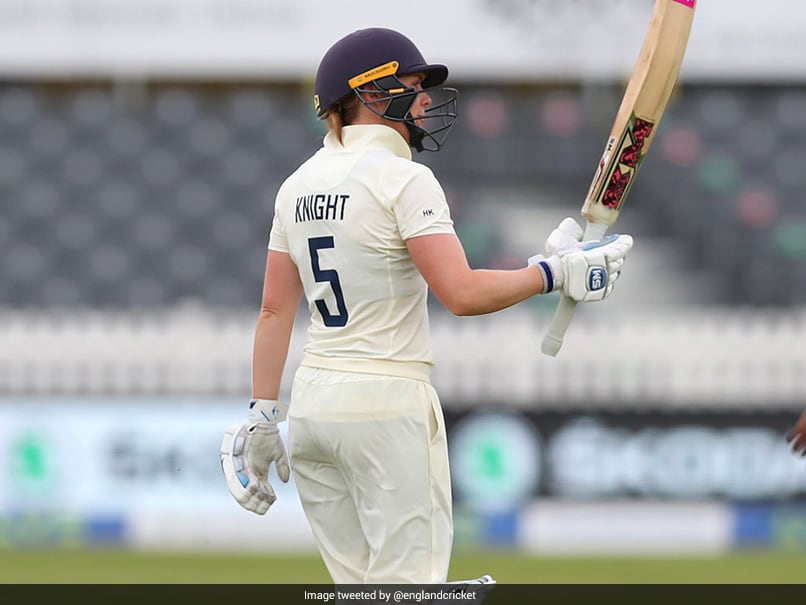 Heather Knight scored 95 as England Women made 269 for 6 on Day 1.© England Cricket/Twitter

Spinners Sneh Rana and Deepti Sharma fashioned India's comeback by triggering a batting collapse in the final session but England Women still managed a decent 269 for 6 on the opening day of the one-off Test in Bristol on Wednesday. Playing a Test match after nearly seven years, India Women were struggling badly but Rana (3/77) and Sharma (2/50) brought the side back by accounting for two batters each in the final session. From a comfortable 230 for 2, England were reeling at 251 for 6 as an old pitch being used for the match assisted the Indian spinners. The Indian bowlers looked rusty and toiled hard for most part of the day before the spinners came to the party. For England, Tammy Beaumont (66) looked solid at the top apart from skipper Heather Knight (95), who missed out on a hundred.

At Stumps, Sophie Dunkley was batting on 12 while Katherine Brunt was on 7. Knight paced her innings to perfection and notched up her third Test fifty just after Tea.

The Indians were sloppy on the field initially as Deepti dropped a straight-forward catch off Natalie Sciver (42) at midwicket off Harmanpreet Kaur's bowling. But she made up for the mistake soon, dismissing Sciver leg before with the batter adding just eight more runs to her score.

The Indians struck again three overs later, this time off-spinner Rana sending back Amy Jones, who was adjudged leg before wicket as the batter went for an unsuccessful review. But it was Deepti who got the big breakthrough in the form of Knight, who was also trapped leg before.

Knight scored her runs off 175 balls with the help of nine boundaries.

Rana soon picked up her third wicket of the day when she induced an edge from Georgia Elwiss to Sharma at slip as England slumped to 251 for 6.

Earlier, England lost Beaumont in the second session but managed to consolidate their position by reaching 162 for two at Tea.

After getting rid of Lauren Winfield-Hill (35) in the first session of the day, India toiled hard before Rana picked up her maiden Test wicket. She got rid of in-form of Beaumont, who was brilliantly caught by Shafali Verma at short leg. Beaumont faced 166 balls and decorated her innings with six fours en route to her second Test fifty.

Knight then batted cautiously and remained unbeaten in the company of Sciver as England made 76 runs off 28 overs in the second session.

The Indian pace duo of veteran Jhulan Goswami and Shikha Pandey made a promising start, doing just enough to trouble the English batswomen on more than one occasion.

In the seventh over, Goswami induced an edge from Winfield-Hill as the batter went for an extravagant drive but Smriti Mandhana dropped the chance in the slip cordon despite getting both hands on the ball.

In the next over, Winfield got lucky again. Debutant Pooja Vastrakar induced a thick edge from the batter but the ball flew between second slip and gully to the boundary.

After a slow and cautious start, England picked up the pace. Winfield was the more positive of the two batters as she lofted Pandey over the mid-wicket to hit the first six of the innings and in the process brought up England's fifty in the 17th over.

An over later, Winfield hit another maximum, this time over backward square leg off Vastrakar. Vastrakar eventually had the last laugh as she had Winfield caught by wicketkeeper Taniya Bhatia, giving India the breakthrough.

As many as five players made Test debut for India, including Verma, Sharma, Vastrakar, Rana and Bhatia, while for England Sophia Dunkley was the lone player to earn a Test cap.

The ongoing match is Indian women team's first Test outing in seven years. They last played a Test match way back in November 2014 against South Africa in Mysuru.

England Women Heather Knight Tammy Beaumont Deepti Sharma Jhulan Goswami Mithali Raj Cricket
Get the latest updates on Fifa Worldcup 2022 and check out  Fifa World Cup Schedule, Stats and Live Cricket Score. Like us on Facebook or follow us on Twitter for more sports updates. You can also download the NDTV Cricket app for Android or iOS.