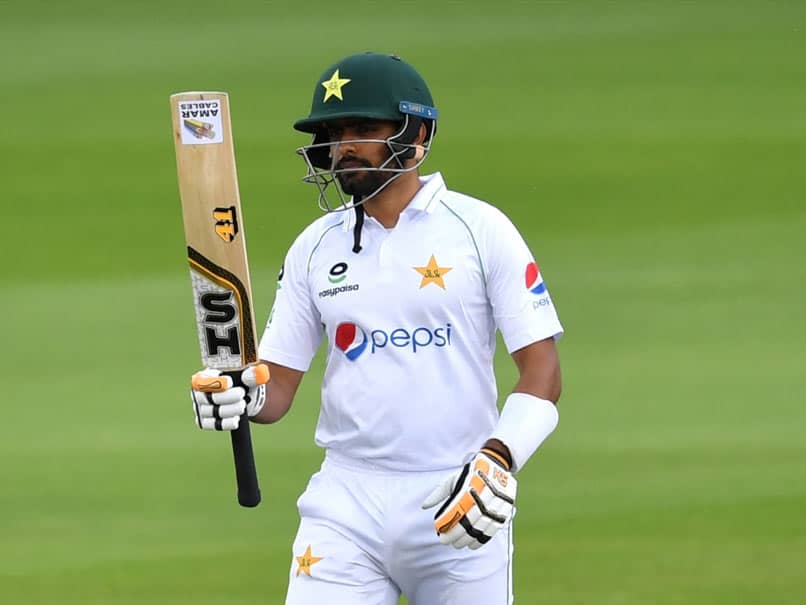 Pakistan's Babar Azam underlined his status as one of the world's leading batsmen.© AFP

Pakistan's Babar Azam underlined his status as one of the world's leading batsmen with a fine unbeaten fifty against England on an interrupted opening day of the first Test at Old Trafford on Wednesday. When bad light forced an early close, Pakistan were 139-2, with Babar 69 not out and Shan Masood unbeaten on 46. But left-handed opener Masood was twice missed on 45 by England wicketkeeper Jos Buttler either side of a lengthy rain break, with off-spinner Dom Bess the unlucky bowler on both occasions.

"They keep going on about the 'Fab Four (Kohli, Australia's Steve Smith, New Zealand's Kane Williamson and England captain Joe Root) - it's the 'Fab Five' and Babar Azam is in that."

When play resumed in the early evening after a long rain delay, Root was soon bowling his occasional off-breaks in tandem with Bess to try and keep the match going under grey skies after Jofra Archer had pitched short to Babar.

But even with two spinners bowling and the floodlights on, the umpires still called a halt at 6:12 pm (1712 GMT).

Pakistan were 43-2 when Babar came in to bat after captain Azhar Ali, who had won the toss, fell lbw for a duck to Chris Woakes.

Babar started cautiously but after the lunch interval, he unfurled an array of stylish attacking shots.

He struck express paceman Archer down the ground for four before driving Bess for another boundary to bring up Pakistan's hundred.

Bess, however, should have removed Masood for 45 when he took the left-hander's outside edge but Buttler dropped the chance.

Then, following the rain delay, Buttler missed a chance to stump Masood after the batsman charged down the pitch.

The mistakes will revive discussion about the wicketkeeper's place in the side with Ben Foakes, arguably a superior gloveman, waiting in the wings.

Babar drew level on 45 not out with Masood, who was on 22 when the right-hander came into bat, going on to complete an impressive 70-ball fifty, including nine boundaries.

The conditions favoured England's four-man pace attack, who had been involved in last month's 2-1 series win over the West Indies, completed at Old Trafford.

Masood and fellow opener Abid Ali did well to survive the first hour before Archer struck.

Having tested Abid with several short-pitched deliveries, the paceman bowled him with a full-length ball for 16 before Azhar was lbw to a Woakes nip-backer for a six-ball duck.

England have not won a Test series against Pakistan since 2010 and they came into this match having lost the series opener in each of their past five campaigns against all opponents.

As was the case during the West Indies series, the three-match campaign is taking place behind closed doors on health grounds, with Pakistan denied the vibrant and vocal support they usually enjoy in England.

Babar Azam Cricket
Get the latest updates on IPL 2020, check out the IPL Schedule for 2020 and Indian Premier League (IPL) Cricket live score . Like us on Facebook or follow us on Twitter for more sports updates. You can also download the NDTV Cricket app for Android or iOS.