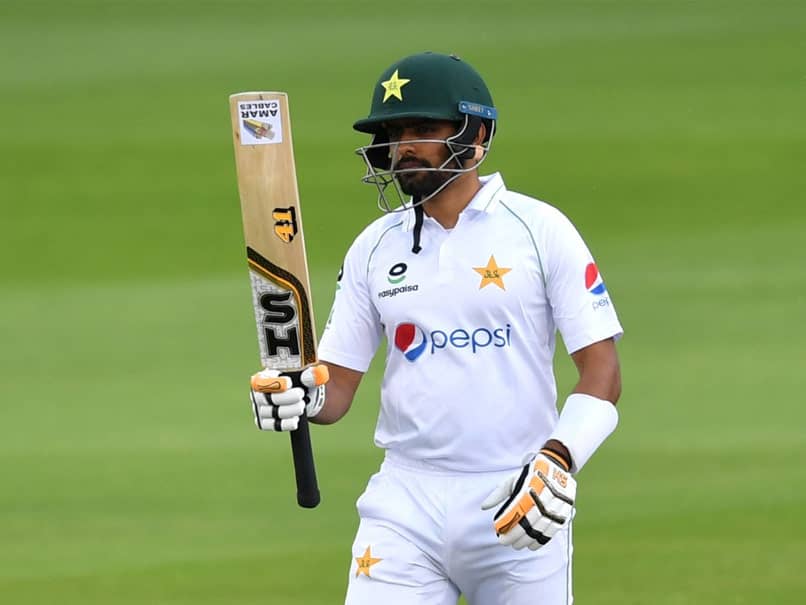 Babar Azam remained unbeaten on 69 at stumps on Day one of the first Test.© AFP

Pakistan's Babar Azam was compared to India's Virat Kohli as one of the world's leading batsmen after his unbeaten fifty on the opening day of the first Test against England on Wednesday. When bad light forced an early close at Old Trafford, Pakistan were 139-2, with Babar 69 not out and Shan Masood unbeaten on 46. But left-handed opener Masood was twice missed on 45 by England wicketkeeper Jos Buttler either side of a lengthy rain break, with off-spinner Dom Bess the unlucky bowler on both occasions. The prolific Babar has now reached a half-century in five successive Test innings, with his previous five matches yielding four hundreds.

"If this lad was Virat Kohli, everyone would be talking about it but because it is Babar Azam, no one is talking about it," said former England captain Nasser Hussain while commentating for Sky Sports.

"They keep going on about the 'Fab Four (Kohli, Australia's Steve Smith, New Zealand's Kane Williamson and England captain Joe Root) -- it's the 'Fab Five' and Babar Azam is in that."

Pakistan were 43-2 when Babar came in after captain Azhar Ali, who had won the toss, fell lbw for a duck to Chris Woakes.

Babar started cautiously but after lunch he unfurled an array of stylish attacking shots en route to a 70-ball fifty featuring nine fours.

He struck express paceman Jofra Archer down the ground before driving Bess for another boundary to bring up Pakistan's hundred.

Bess, however, should have removed Masood for 45 when he took the left-hander's outside edge but Buttler dropped the chance.

When play resumed in the early evening after a long rain delay, Root was soon bowling his occasional off-breaks in tandem with Bess to try and keep the match going under grey skies after Archer had pitched short to Babar.

But even with two spinners bowling and the floodlights on, the umpires still called a halt at 6:12 pm (1712 GMT) before the ground was bathed in sunshine soon afterwards.

There was still time, however for Buttler to miss stumping Masood after the batsman charged down the pitch.

The mistakes will revive discussion about the wicketkeeper's place in the side with Ben Foakes, arguably a superior gloveman, waiting in the wings.

"The game is pretty funny...you get an element of fortune every now and then," said Masood.

Silverwood defended Buttler by saying: "No one means to miss them. He's very capable of doing something very special for us tomorrow."

The conditions favoured England's four-man pace attack, who had been involved in last month's 2-1 series win over the West Indies, completed at Old Trafford.

But Azhar's decision to bat first was understandable given Pakistan are playing two leg-spinners in Yasir Shah and Shadab Khan, who are expected to be more effective on a wearing pitch.

"We always knew the new ball was going to be a struggle in England," said Masood after batting for nearly three-and-half hours against the likes of James Anderson, Stuart Broad, Woakes and Archer.

"It's not an easy gig being an opening batsman in this country but with it comes an opportunity to give the team a good start, especially when you bat first."

Masood and fellow opener Abid Ali did well to survive the first hour before Archer struck by bowling Abid with a full-length ball having made him wary of coming forward with several short-pitched deliveries.

As was the case during the West Indies series, the three-match campaign is taking place behind closed doors on health grounds, with Pakistan denied the vibrant and vocal support they usually enjoy in England.

"I can't get my head round the fact TV companies are paying a huge amount of money, fans are watching the only Test cricket going on in the world from home, yet we've lost out on so much cricket," he told BBC's Test Match Special.

"There were two off-spinners bowling and we went off for bad light. It just doesn't make sense. When is Test cricket going to learn?"

Virat Kohli Nasser Hussain Cricket
Get the latest updates on India vs England Series, India vs England , live score and IPL 2021 Auction . Like us on Facebook or follow us on Twitter for more sports updates. You can also download the NDTV Cricket app for Android or iOS.