Jack Leach missed out on a century while Jason Roy notched up his maiden Test half-century on Day 2 of the one-off Test against Ireland. 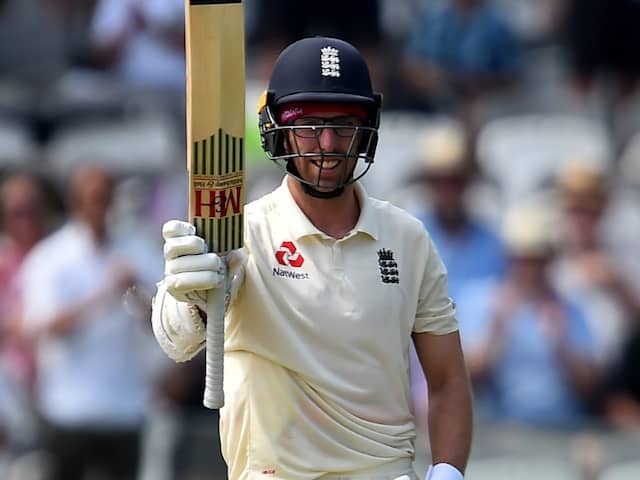 Jack Leach notched up a brilliant half-century on Day 2.© AFP

Top-order batsmen Jack Leach, Jason Roy notched up brilliant half-centuries as England scored 303/9, to take a 181-run lead against Ireland at stumps on Day 2 in the one-off Test. England had been well-placed at 171/1 second time around, a score built on a second-wicket stand of 145 between nightwatchman Jack Leach, who made 92, and Test debutant Jason Roy (72). Umpires had to call it a day early with lightning flashes and rain interrupting the play at 6:10 pm local time (1710 GMT) in a match scheduled for four days rather than the usual five for a Test.

But England's top-order let them down again, with seven wickets falling for 77 runs either side of tea as they slumped to 248/8 on a ground where just 11 days earlier they had won the World Cup.

Sam Curran, not for the first time in his short career, then added valuable lower order runs with a brisk 37 featuring two sixes before he holed out and Stuart Broad was 21 not out at stumps.

Ireland are playing in just their third Test, with the visitors losing on debut to Pakistan last year and against fellow newcomers Afghanistan in March.

But that did not stop them routing England on Wednesday, with seamer Tim Murtagh taking a superb 5-13 on his Middlesex home ground.

England resumed Thursday on their overnight 0-0 after Ireland had made 207, featuring Andrew Balbirnie's 55.

Unexpected opener Leach, who survived a Murtagh maiden on Wednesday, played watchfully but made the most of any loose deliveries.

Left-hander Rory Burns fell for six when he pushed hard at a Boyd Rankin delivery and edged a simple catch to wicketkeeper Gary Wilson.

Roy, looking to make England's problem position of Test opener his own after starring in their World Cup triumph, off-drove a four off paceman Mark Adair and hoisted off-spinner Andy McBrine for six.

Leach went to 47 with a straight-driven four off Stuart Thompson before his edged boundary through third man off the medium-pacer saw the Somerset left-arm spinner, playing his first Test at home, to his fifty.

Roy cut Thompson for his seventh four to complete a 47-ball fifty in just his second Test innings but the attacking batsman was denied a century on debut by a Thompson in-ducker that bowled him.

The bespectacled Leach, having surpassed his previous first-class best of 66, was dropped twice until eventually a defensive edge was held by Adair off the bowling of Murtagh.

Leach, who had been in sight of an achievement that eluded batting greats Brian Lara, Ricky Ponting and Sachin Tendulkar -- a Test hundred at Lord's -- walked slowly off to a standing ovation after batting for 220 minutes and facing 162 balls, hitting 16 fours.

England suffered a self-inflicted wound when Joe Denly was run out after being sent back by captain Joe Root when the skipper was already two-thirds of the way down the pitch.

The impressive Adair (3-66) then had Jonny Bairstow lbw for a duck.

Root, whose 31 took 64 balls, tried to break the shackles by going down the pitch to Adair only to see an edged drive well caught high to his right by the diving Wilson.

Jason Roy Cricket
Get the latest updates on IPL 2020, check out the IPL Schedule for 2020 and Indian Premier League (IPL) Cricket live score . Like us on Facebook or follow us on Twitter for more sports updates. You can also download the NDTV Cricket app for Android or iOS.