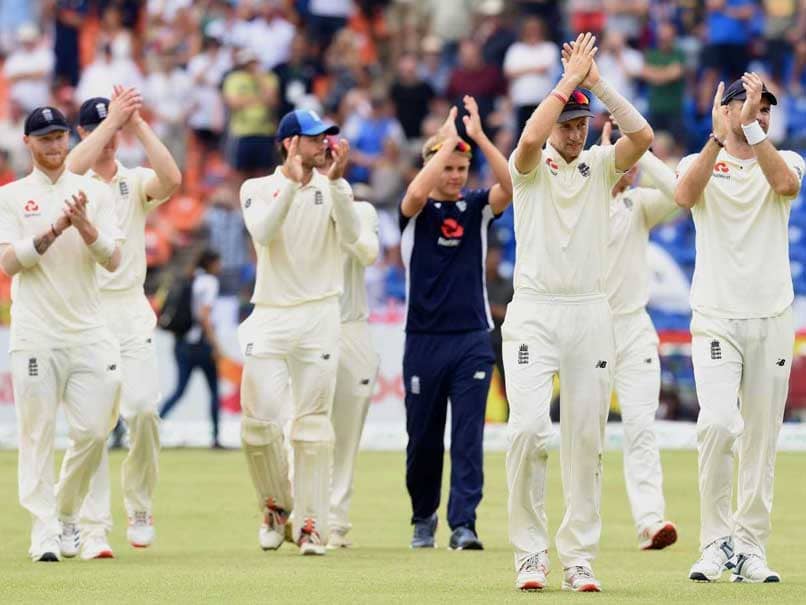 Joe Root set his sights on taking England to the top of the world rankings.© AFP

Captain Joe Root set his sights on taking England to the top of the world rankings after his spin trio finished off Sri Lanka in the second Test on Sunday to seal the series with a match to spare. England needed just 30 minutes on the fifth day to take the final three Sri Lanka wickets. Jack Leach got last man Malinda Pushpakumara caught and bowled to claim his first five-wicket Test haul. Moeen Ali took four wickets and Adil Rashid one as England's three frontline spinners accounted for the whole innings, as well as 18 of Sri Lanka's 20 wickets in the game overall.

Root's 124 in England's second innings also played a key role in the 57-run victory and earned him the man-of-the-match award.

Celebrating England's first away series win since beating South Africa in 2015-16 and his first away triumph as captain, Root sees England -- who are currently ranked third in the world -- challenging India for the top Test team spot.

"It was a brilliant Test match," said Root, whose team had to twice fight back after their top order batsmen gave away cheap wickets.

"It ebbed and flowed throughout, like against India in the summer, and it's pleasing to see another close game go our way.

"We said we'd come out here and play bold cricket, and be courageous. It's easy to talk a good game but we've backed it up," Root said.

"We have to keep looking to improve. The team has grown in the last 18 months but we are not the finished article. We want to get to number one in the world and that means performing in all conditions around the world."

Sri Lanka needed 301 in their second innings to register an upset win but managed just 243 at the Pallekele ground.

They started the day needing 75 more runs and with three wickets in hand had an outside chance.

After Niroshan Dickwella was caught by Ben Stokes off Moeen Ali for 35 -- the first wicket of the morning -- Sri Lanka's hopes were all but extinguished.

Moeen then struck No. 10 batsman Suranga Lakmal, the Sri Lanka skipper, on the pad next ball for a strong lbw appeal which was turned down. He bowled Lakmal his very next delivery.

Pushpakumara lasted only eight balls before chipping the ball back to Leach and the game was over.

Lakmal insisted his side had been "unlucky". But England's triumph followed a crushing 211-run win in the first Test in Galle, and was set up by masterful performances from Leach, Ali and Rashid.

The spinners were dominant for both sides, as Sri Lanka's Dilruwan Perera took seven wickets in the game and Akila Dananjaya -- who now goes off for an investigation into his bowling action -- eight.

"It feels good to have three spinners in the team. We all know our roles and help each other out. It's nice to make history and hopefully we can carry that on now," said Rashid.

Leach, playing just his third Test, said the game had been "unbelievable".

Root insisted that England will not ease up for the third and final Test which starts in Colombo on Friday.

He faces some tough selection choices after stand-in wicketkeeper Ben Foakes again shone with the bat -- hitting a crucial unbeaten 65 in the second innings -- just as Jonny Bairstow steps up claims for a recall after injury.

Sri Lanka will be looking to strengthen their rebuilding, said coach Chandika Hathurusingha.

"We're looking at the bigger picture," he said.

"This is the first series we lost this year. We won against South Africa 2-0. In these two games there were very close games. We had the opportunity to win both games at times.

"England played better cricket than us. We have to accept that. We have to learn from these mistakes," he added.

"The skill is still there -- that's what I'm banking on. That's the hope that I have with this team."