Jos Buttler made a dashing 77 not out as England beat Australia by six wickets for a series-clinching win, in the second T20I at Southampton. 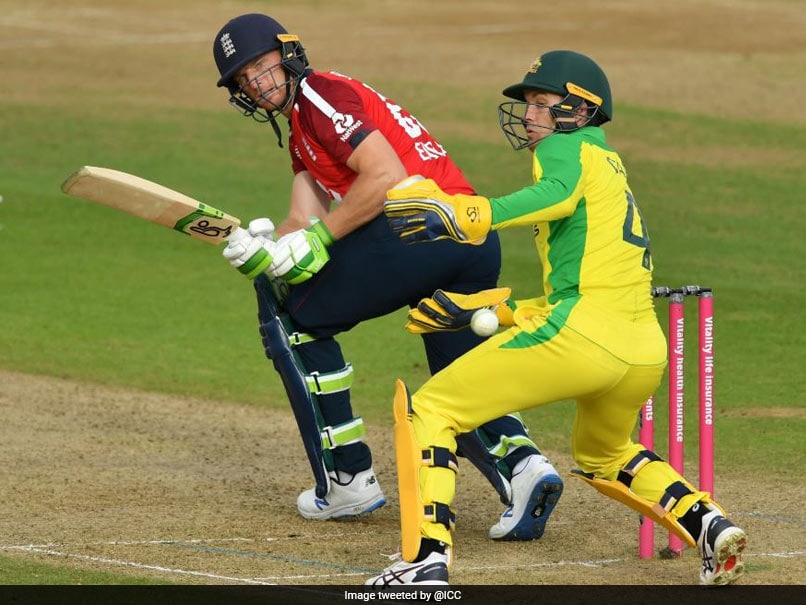 Jos Buttler's unbeaten knock of 77 helped England chase down the target with 7 balls to spare.© Twitter

Jos Buttler made a dashing 77 not out as England beat Australia by six wickets for a series-clinching win, in the second Twenty20 international at Southampton on Sunday. Victory saw England take an unbeatable 2-0 lead in a three-match contest and they will replace Australia at the top of the global T20 standings, with another win at Southampton on Tuesday. England, set 158 to win, finished on 158-4 with seven balls to spare.

They needed 18 off the last two overs. Australia had failed to score 19 off two overs in a dramatic two-run defeat in the first game on Friday.

But England got there in five balls from Adam Zampa, with Moeen Ali hitting a six and a four off successive deliveries from the leg-spinner.

Buttler finished the match with a huge straight six off Zampa.

Buttler faced just 54 balls, including eight fours and two sixes, for his highest score in a T20 international, surpassing 73 not out against Sri Lanka at Southampton four years ago.

Victory was set up by England's bowlers, who held Australia to a modest 157-7 after the tourists had won the toss.

"We put in a better bowling performance; we asked the guys to stand up in the first six overs and they did."

"Having a world-class player like Buttler, in form as he is, makes that chase a lot easier."

Australia captain Aaron Finch acknowledged the quality of opener Buttler's innings, saying: "When you fail to get one of the opposition openers out, who is a great player, that is always going to be tough."

Finch added: "We were probably a few runs short of where we needed to be, but I felt if we could match their powerplay with ours with the ball, we'd be in with a shot but we didn't take enough wickets in that period."

Jofra Archer had David Warner caught behind for a third-ball duck and Australia were 89-5 with seven overs left, before a late-order rally gave them a glimmer of hope.

This series was meant to act as a warm-up for October's T20 World Cup in Australia.

But that tournament will not take place because of Covid-19, with the next T20 World Cup set for India in 2021.

England lost Jonny Bairstow, Buttler's opening partner, early in their chase. Swinging round from a pull off Mitchell Starc, Bairstow knocked over his stumps and was out hit wicket for 19.

But Buttler, well-supported by Dawid Malan (42) in a second-wicket stand of 87, manipulated the field in style.

England, who have struggled for powerplay wickets, made a sensational start after losing the toss when fast bowler Archer, topping 90 mph in his first over, had the dangerous Warner caught behind for nought.

Warner reviewed immediately but replays confirmed he had gloved the ball and Australia were nought for one.

Australia were 3-2 in the second over, after left-hander Alex Carey, promoted to number three in place of star batsman Steve Smith, gave himself room to drive but only edged Mark Wood, like Archer a 50-over World Cup-winning fast bowler, to wicketkeeper Buttler.

Smith pulled Tom Curran for six but he was run out for 10 by England captain Eoin Morgan's underarm direct hit from midwicket, with just one stump to aim at.

Jos Buttler Cricket
Get the latest updates on India vs South Africa and check out  Schedule, Results and Live Score. Like us on Facebook or follow us on Twitter for more sports updates. You can also download the NDTV Cricket app for Android or iOS.