James Anderson and Stuart Broad have set their sights on a final Ashes series in Australia before they consider retirement. 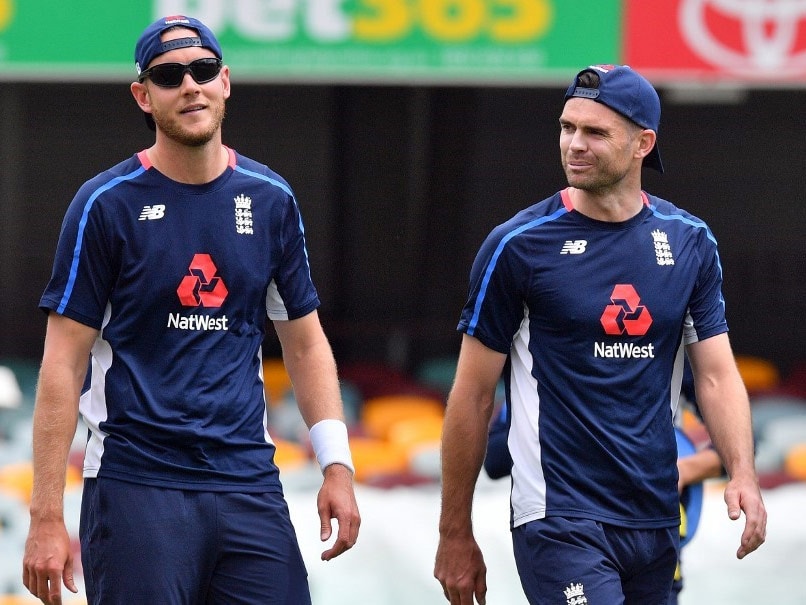 James Anderson and Stuart Broad are entering the twilight of their careers.© AFP

England pace bowlers James Anderson and Stuart Broad have set their sights on a final Ashes series in Australia before they consider retirement. Anderson and Broad are first and second respectively in England's list of all-time Test wicket-takers, but both are entering the twilight of their careers. Anderson is 37 and has endured a series of injury problems over the last 12 months.

Although Broad is four years younger than Anderson, he believes his career will not last as long as his fellow paceman.

With the end in sight, both are eager to keep their England places long enough for a memorable farewell Ashes series in Australia in 2021/22.

When asked by Anderson for his retirement plans during an Instagram Live Q&A, Broad said: "I don't think I could go until your age. Your action's so smooth, it looks a lot calmer on your body whereas mine is a little more forceful through my body I think.

"I'd never want to get to that place where I'm bowling against a 19-year-old and they're going, 'I thought someone said he used to be a good bowler'. I'd hate that. I'd prefer to go that little bit earlier than that little bit later.

"But I'm loving the environment at the minute. I love playing for England.

"I still have huge motivation to keep playing and you just assess that year by year. And we've got that carrot dangling over us of Australia in Australia which looks like an achievable carrot to grab."

Australia are the current Ashes holders after they retained the urn following the drawn series in England last year.

The last time either side won an Ashes series away from home was when England triumphed 3-1 in Australia in 2010/11.

Anderson sees no reason why he should not feature when England next meet their old rivals, as long as he maintains his high standards.

"The big thing is standards. If your standards feel like they're dropping then yeah you might consider finishing," he said.

"But as long as my standards stay high, my fitness levels stay good and my skills stay where I want them to be and my speed stays pretty good which they have been (I'll keep playing).

"We've got an exciting team and a few young guys who are just starting out on their journey, we've got some more established guys and we've got two guys who have been around a long time."

Stuart Broad Cricket
Get the latest updates on SA vs IND 2021-22, check out the Schedule and Live Score . Like us on Facebook or follow us on Twitter for more sports updates. You can also download the NDTV Cricket app for Android or iOS.