The deal will keep Jofra Archer at Sussex till at least the end of the 2022 season. 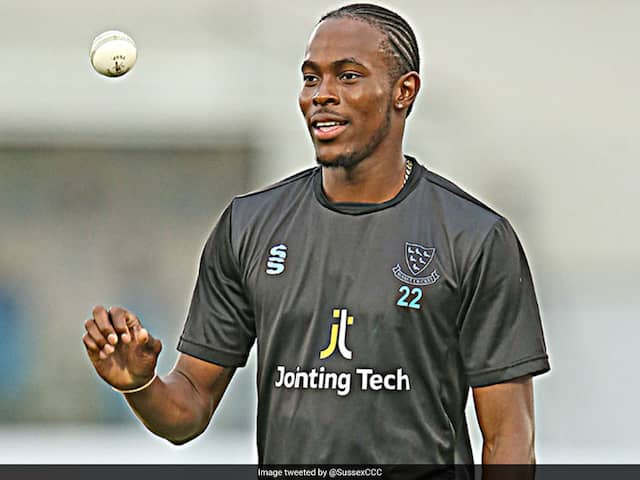 England pace bowler Jofra Archer has signed a two-year contract extension with Sussex, the club announced on Thursday. The 24-year-old rarely gets to play for his county due to his England commitments after making an instant impact in being their leading wicket-taker in the triumphant World Cup campaign. The Barbados-born star also held his nerve to bowl the decisive Super Over that saw England edge New Zealand in the final last year.

The deal will keep him at Sussex -- who are presently in the second tier of the county championship -- till at least the end of the 2022 season.

"Sussex gave me my opportunity right at the beginning of my career, so I am very happy to commit long term to the club," Archer told the Sussex Cricket website.

"I really do enjoy playing with everyone here at Sussex and it was really nice to come back down last year to play a few games with the lads.

"It's the same club that I left it as and it's nice to know nothing has changed.

"Sometimes people sit in my space in the dressing room now, but that's fine!"

Sussex head coach Jason Gillespie said Archer may not be available often but once he dons the Sussex strip he is proud as punch.

"We're delighted that Jofra will continue to be with us at Sussex," he said.

"I'm really looking forward to having him play for us when his England commitments allows.

"He loves playing for Sussex -- he's like a kid in a candy store!

"Hopefully we can play a role in helping him continue to get better," added the former Australian pace bowling great.

Since his debut for Sussex in July 2016, Archer has raced to 196 wickets in 97 appearances across all three formats.

In first-class cricket for the county, he has taken 131 wickets in just 28 matches.

His outstanding performances for the county led to an England debut in May 2019.