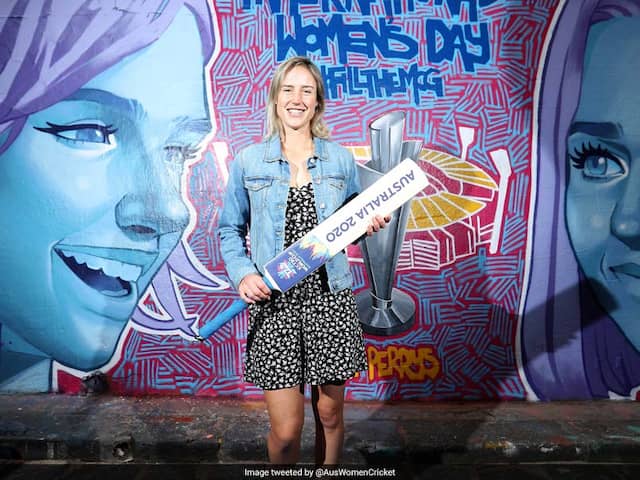 Ellyse Perry put the finishing touches to the mural on Thursday.© Twitter

Ahead of the Women's T20 World Cup, Australia's Ellyse Perry has unveiled a mural celebrating two of the world's most famous 'Perrys' -- Ellyse Perry and global pop superstar Katy Perry. Ellyse on Thursday put the finishing touches to the mural, which was painted in the iconic Hosier Lane of the city by local artist Tayla Broekman as part of the T20 World Cup Trophy Tour. Alongside Ellyse and Katy, the artwork also depicts the T20 World Cup 2020 trophy that the world's ten best teams will be competing for.

American popstar Katy will be performing at the final of T20 World Cup, slated to be played on March 8 at the Melbourne Cricket Ground (MCG). Katy will perform two songs to get the final underway followed by a one-hour post-match concert, with her full band, immediately following the match.

"It's an incredible ambition to try and fill the MCG on International Women's Day for the T20 World Cup final," said Ellyse while speaking at the unveiling of the mural.

"As a team, we have a long way to go, but we recognise we have a great opportunity ahead of us and we're looking forward to getting into the event. Regardless of whether we're there, it'll be an incredible moment for women's cricket."

"It's very exciting to have someone like Katy Perry coming to play at the final and a bit surreal to be sharing a place with her on this mural. It's a bit of fun that she shares the same name, so hopefully I can get her in one of my Australian shirts," she added.

The tournament will get underway with defending champions Australia taking on India on February 21.

Australia Women Ellyse Perry Cricket
Get the latest updates on IPL 2020, check out the IPL Schedule for 2020 and Indian Premier League (IPL) Cricket live score . Like us on Facebook or follow us on Twitter for more sports updates. You can also download the NDTV Cricket app for Android or iOS.