James Taylor made 70 while Nick Compton hit 63 not out as the pair added 125 runs for the fourth wicket. 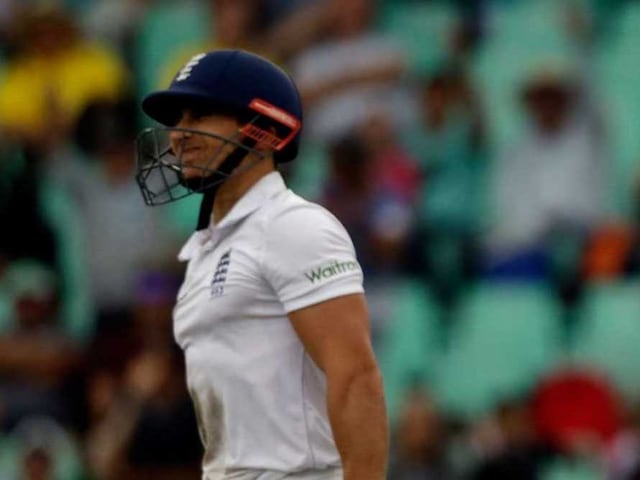 James Taylor led England's fightback on the first day of the first Test against South Africa on Saturday as his half-century took the tourists out of trouble and to 179-4 at stumps.(Scorecard)

The 5-foot-6 Taylor - affectionately nicknamed 'Titch' - stood tall for England to make 70 after Dale Steyn's fiery early burst had the tourists struggling at 12-2 in overcast, fast-bowler friendly conditions in Durban.

Steyn struck the first blows with the dismissals of England captain Alastair Cook for a duck and test debutant Alex Hales for 10. Joe Root's aggressive innings of 24 ended swiftly, leaving Taylor and Nick Compton to steady the innings.

Compton was 63 not out and helped Taylor rescue England with a 125-run partnership on the opening day of the four-Test series against the top-ranked Proteas.

Steyn ended their resistance when he tempted Taylor to hang his bat out and feather an edge to wicketkeeper AB de Villiers right at the end of the day. Steyn took 3-29 to underline his status as South Africa's most valuable bowler.

With rain in the air and with Steyn fit again after a groin problem and back in South Africa's lineup, captain Hashim Amla put England in to bat in the morning.

Steyn immediately applied the pressure as England's top order had to battle the coastal Durban weather as well as the South African bowling spearhead. The rain caused a delay to the start of the match and two further breaks in play, and the floodlights were on from early in the afternoon to counter the gloom.

Cook, who was never comfortable, edged Steyn to Dean Elgar at second slip in the third over of the test. Hales fell to a catch behind by wicketkeeper AB de Villiers as Steyn capitalized on the conditions. That Hales wicket led to a running, fist-pumping celebration from the South African fast bowler.

Root cracked two fours and sent a pull for six off seamer Kyle Abott in an attempted counterattack following the exit of Cook and Hales. It ended swiftly when offspinner Dane Piedt's first delivery of the game turned sharply and trapped Root lbw back near his stumps for South Africa's third wicket, with England then 49-3.

But Taylor and Compton, who was recalled for his first Test in more than two years, brightened England's prospects significantly with their stand, blunting South Africa's attack and putting the host on the back foot for most of the afternoon.

Compton, who was born in Durban, provided the steadying influence for first Root and later Taylor to work around. His half-century came off 145 balls. Despite his height, Taylor stood up to Steyn and fellow quicks Abbott and Morne Morkel, using the hook and pull to good effect among his nine fours.

England had begun to turn the tide in Durban when Amla decided to experiment with part-time seam bowler Stiaan van Zyl near the end of the second session in an attempt to break the growing Taylor-Compton partnership. They added another 53 runs in the final session before Taylor's very late dismissal.

Comments
Topics mentioned in this article
England Cricket Team South Africa Cricket Team James Taylor Cricket
Get the latest Cricket news, check out the India cricket schedule, Cricket live score . Like us on Facebook or follow us on Twitter for more sports updates. You can also download the NDTV Cricket app for Android or iOS.