The West Indies captain said that his flight from Dunedin to Wellington for the second Test against New Zealand was his scariest for some time. 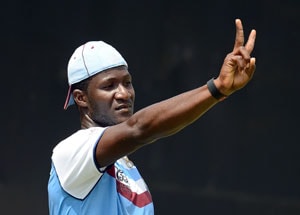 West Indies captain Darren Sammy said that his flight from Dunedin to Wellington for the second Test against New Zealand was his scariest for some time.

Sammy has vowed never to fly into Wellington again after high winds forced the pilot to abandon one landing attempt before getting both teams down safely on Monday.

Other members of the West Indies team were also shaken by the flight experience and some New Zealanders on the same flight were quoted as saying it was one of the roughest they had known.

"Most of our guys were a bit terrified, but hopefully the pitch at the Basin Reserve for the second Test is not as terrifying as the landing. I was once on a flight like that where one of the engines broke down and that was when I developed my fear of flying," said Sammy.

"I was screaming like my daughter. I'm definitely taking the bus next time. I don't mind the ferry. My wife was due to fly into that Wellington airport, I told her no chance so she's going to do Sydney-Auckland not Sydney-Wellington. Not a chance."

West Indies coach Ottis Gibson has described the experience as scary and terrifying but said his players have now recovered.

"I don't suppose anything can prepare you for that. It was a little bit scary, I've experienced it before myself in South Africa but a lot of us haven't. There were a few finger nails chewed down to the bitter end," said Gibson.

"We've recovered from it now. For some it was good fun, for some a bit terrifying."

The first Test between West Indies and New Zealand ended in a draw.

Comments
Topics mentioned in this article
Cricket New Zealand Cricket Team Sreesanth Ottis Delroy Gibson Darren Sammy
Get the latest updates on IND vs NZ 2021, check out the Schedule and Live Score . Like us on Facebook or follow us on Twitter for more sports updates. You can also download the NDTV Cricket app for Android or iOS.