With almost all sporting events grinding to a halt due to the COVID-19 pandemic, sports stars are finding ways to keep the humour alive. 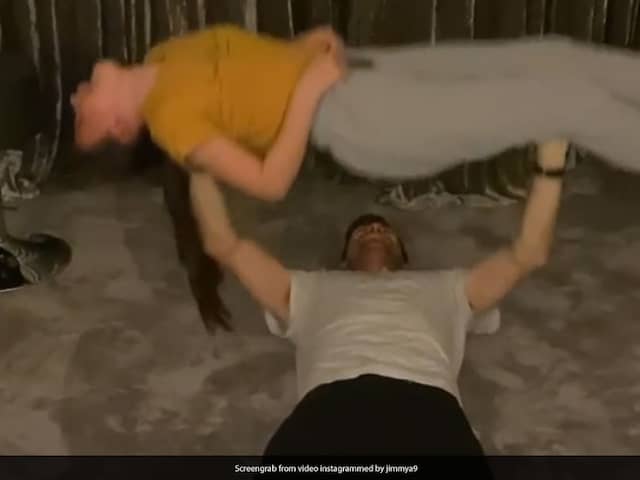 Jimmy Anderson was happy using his daughters as weights at home amid the coronavirus pandemic.© Instagram

James Anderson, much like other sports personalities from across the globe, is enjoying a break from cricket to stay safe from the coronavirus threat. The English fast bowler recently posted a light-hearted video on Instagram where he can be seen lifting his daughters as weights as he trains at home. In the caption, Anderson says, "The girls are more than happy to help me train at home". England were supposed to play a Test series against Sri Lanka later this month which has now been postponed due to the coronavirus situation.

James Anderson is one of England's premier fast bowler in Test cricket. The right-arm fast bowler has played 151 Test matches and has scalped 584 wickets with an economy rate of 2.86 and a strike rate of 56.1. In ODI's, Anderson has 269 wickets in 194 games.

He is one of the few bowlers who have managed to test Indian captain Virat Kohli in the past. Anderson has dismissed him five times in Test cricket which not many others have achieved. Other than Anderson, Nathan Lyon and Stuart Broad have also troubled Kohli in Test cricket.

Anderson was not included as a part of the Test squad against Sri Lanka as he is still recovering from his rib injury which he suffered in Cape Town during the Test series against South Africa. The English Cricket Board has suspended all forms of cricket as a safety measure against coronavirus, and that may affect their participation in the IPL which is scheduled to begin from April 15.

James Anderson Cricket
Get the latest updates on IPL 2020, check out the IPL Schedule for 2020 and Indian Premier League (IPL) Cricket live score . Like us on Facebook or follow us on Twitter for more sports updates. You can also download the NDTV Cricket app for Android or iOS.