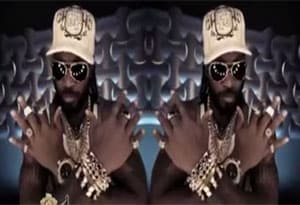 Not just bludgeoning sixes, singing and dancing too comes naturally to Chris Gayle. The big-hitting Jamaican, who smashed the fastest (30-ball) century in T20 cricket during the Indian Premier League this year, has shown his 'musical' side by singing and dancing to the tunes of 'Humma, Humma' from the 1995 blockbuster, Mani Ratnam's Bombay. The video will be aired later this month.

An avid music lover, Gayle is accompanied by Bollywood actor and former VJ Purab Kohli and ex-Indian Idol star, Meiyang Chang. The video, sponsored by a popular liquor brand, was shot in Bangalore in May when Gayle was playing for the Royal Challengers Bangalore. (Read: Virat Kohli shakes a leg with Anushka Sharma for a TV commercial)

Whether playing for the West Indies or RCB, the 33-year-old is quite a 'cheerleader.' His 'Gangnam' style dance moves after the West Indies' won the 2012 ICC World T20 are can never be forgotten. Gayle, earlier this year, appeared in a cola commercial that also featured leading Bollywood actress Priyanka Chopra.

The batsman to hit most centuries in the shortest form of the game sports a hairdo inspired from the legendary reggae star, Bob Marley. Last year, after the T20 World Cup title, Gayle revealed his aspirations to do a music video with the 'Baadshah' of Bollywood Shah Rukh Khan.

Comments
Topics mentioned in this article
Cricket Chris Gayle
Get the latest updates on IPL 2021, check out the IPL 2021 Schedule and Indian Premier League Live Score . Like us on Facebook or follow us on Twitter for more sports updates. You can also download the NDTV Cricket app for Android or iOS.