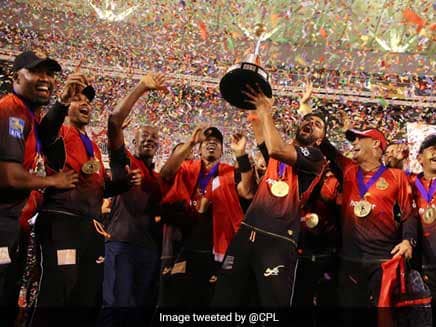 Chasing 148 to win, Ramdin played the anchor even as McCullum pulled out the big shots. The two added 52 for the first wicket before McCullum skied Chris Green for Delport to take the catch in the seventh over - the former New Zealand captain hit 39 in 24 balls.

"Thanks to almighty god and thanks to my teammates - to my team, this victory is for Trinidad and Tobago. In a tournament like this, you can lose close games but we had the best team and we deserved to win," said champions Trinbago Knight Riders captain Bravo after the victory.

"I am happy with the way our team played throughout the tournament. I think the first ball of the day by Ali Khan set the tone for us. Ronchi got them off to a great start but Pierre showed his courage to come back. Colin Munro put an icing on the cake along with Brendon McCullum.

"They rely heavily on (Imran) Tahir and Green while opening the ball. I knew we have the best finishers in the tournament and to win the final with eight wickets, I am really happy."

Pierre was adjudged Player of the Match for his brilliant bowling figures of 3/29.

"It's disappointing to be on the losing side, but to play in the finals is what you look forward to," said Rayad Emrit, the captain.

"Unfortunately, it wasn't our night as the Knight Riders were too good for us. I am proud of the boys and their efforts. We got a young squad and talented players. I thought Ronchi was awesome and he showed his class. Since his wicket, there was a regular fall of wickets," Emrit added.

Brendon McCullum Cricket
Get the latest updates on IPL 2020, check out the IPL Schedule for 2020 and Indian Premier League (IPL) Cricket live score . Like us on Facebook or follow us on Twitter for more sports updates. You can also download the NDTV Cricket app for Android or iOS.