Brett Lee shared a picture with actress Tannishtha Chatterjee, who starred with him in the movie 'Unindian'. 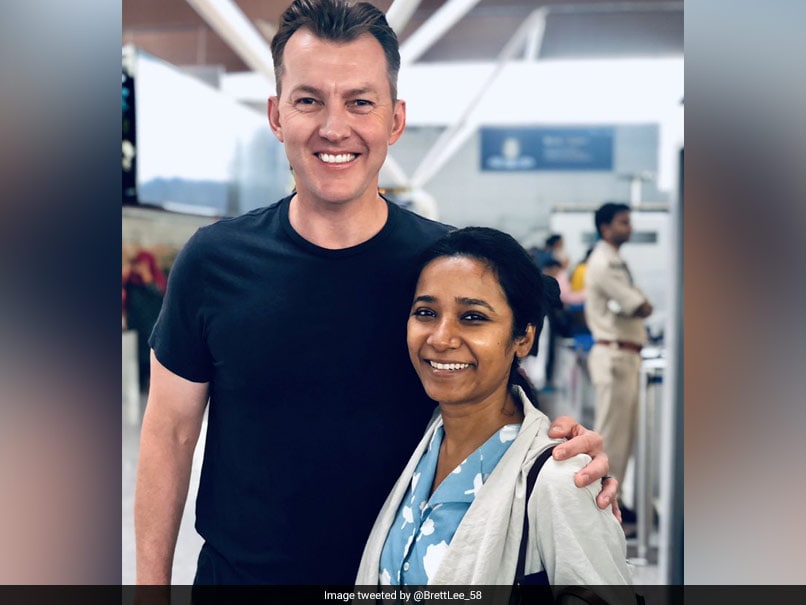 Brett Lee, former Australia fast bowler, tweeted a photo with Tannishtha Chatterjee, his co-star from the film 'Unindian'. "So nice to randomly bump into my co actor @TannishthaC in India," he tweeted along with the photo. "Best of luck with your new film Roam Rome Mein," Brett Lee added. He also tagged 'Sacred Games' actor Nawazuddin Siddiqui, who, along with Tannishtha Chatterjee, plays the lead role in their upcoming film. Fans immediately poured in their love for the former Australian fast bowler.

So nice to randomly bump into my co actor @TannishthaC
in Best of luck with your new film
Roam Rome Mein #roamromemein @Nawazuddin_Shttps://t.co/FtXWLZ7UmQ pic.twitter.com/WyiLxmkyri

"Incredible," a fan tweeted, with the 'folded hands' emoji.

"Unindian was a great movie," another user tweeted. "Mr. And Miss. UnIndian," wrote another fan.

Unindian is a 2015 Indian-Australian romantic comedy film starring Brett Lee and Tannishtha Chatterjee in the leading roles. Supriya Pathak and Gulshan Grover were also part of the movie's cast.

Unindian was Brett Lee's only foray into movies, apart from a cameo along with several other cricketers in the Harman Baweja-starrer 'Victory'.

Tannishtha Chatterjee has starred in several movies, most notably in 'Angry Indian Goddesses' and 'Parched'.

Brett Lee will make a return to cricketing action when he appears in the Road Safety World Series T20 competition in India next year, along with other retired stars such as Sachin Tendulkar, Brian Lara and Virender Sehwag among others.

The pacer is known for his love for India, and was seen enjoying sweets on Diwali last year along with Sachin Tendulkar and former South Africa batsman Jonty Rhodes.

Brett Lee was a phenomenal bowler for Australia, picking up 310 wickets in 76 Test matches. He also has 380 wickets to his name from 221 ODIs and 28 wickets from 25 ODIs.

Brett Lee Cricket
Get the latest updates on ICC Women's Cricket World Cup 2022 and IPL 2022, check out the Schedule , Live Score and IPL Points Table. Like us on Facebook or follow us on Twitter for more sports updates. You can also download the NDTV Cricket app for Android or iOS.