Michael Vaughan believes that there is only one team in the world that can "compete in Aussie conditions against this Australian Team" -- India. 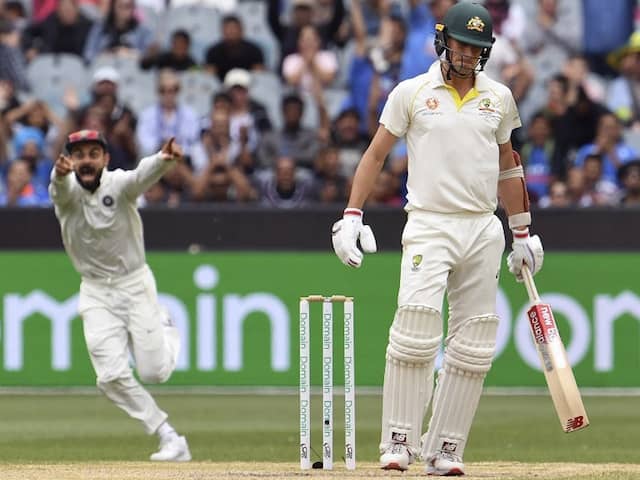 India had won their first Test series on Australian soil, the last time they visited the country.© AFP

Australia took a big step towards securing a 1-0 lead against New Zealand in the three-match Test series at home after taking an overall lead of 417 at stumps on Day 3 of the first Test at Perth Stadium on Saturday. This despite the hosts suffering a late batting collapse which left them at 167 for six in the second innings. Australia have been in top form, thrashing Pakistan 2-0 in the recently-concluded two-Test series at home. So far, they have dominated the first Test against New Zealand and look primed to win another Test at home. Former England captain Michael Vaughan is of the belief that there is only one team in the world that can "compete in Aussie conditions against this Australian Team" -- India.

India have been on a roll in 2019, winning seven out of the eight Tests they have played this year. The last time India visited Australia they made history by winning their first Test series on Australian soil.

The Englishman in a tweet said that no other team has the tools to compete Down Under against Tim Paine's side.

Only 1 Team in the World can compete in Aussie conditions against this Australian Team .. that's #India .. No other team has the tools imo .. #AUSvNZ @FoxCricket

Bit of an early crow here Vaughny? Boult to come back in will be a huge benefit to Nz. As will not having to start batting against the new pink ball under lights! Aus likely to go 1-0 up but seen enough to suggest it won't be one way traffic throughout. Time will tell I guess..

Former Australia opener Mark Waugh also reacted, saying that lack of a quality spinner will be New Zealand's achilles heel in the next two Tests.

Lack of a quality spinner big issue for NZ in the next 2 tests.

Having led by 250 runs on the first innings, the home side were 167 for six at stumps, with Matthew Head on eight and Pat Cummins on one -- an overall lead of 417.

Cruising at 131 for one when Marnus Labuschagne (50) and Joe Burns (53) were at the crease, the Australians lost five for 29 under lights later in the day against some spirited short-pitched bowling from the Kiwis, with Tim Southee claiming 4-63.

Burns said the Australians were not too concerned by losing the late wickets.

"Really happy with where we are at, although it was disappointing to lose a few wickets tonight," he said.

"In the grand scheme of the game we're in a good position and in control of the game."