The Melbourne Stars fell short during the run-chase in a rain-affected match that capped a near two-month competition. 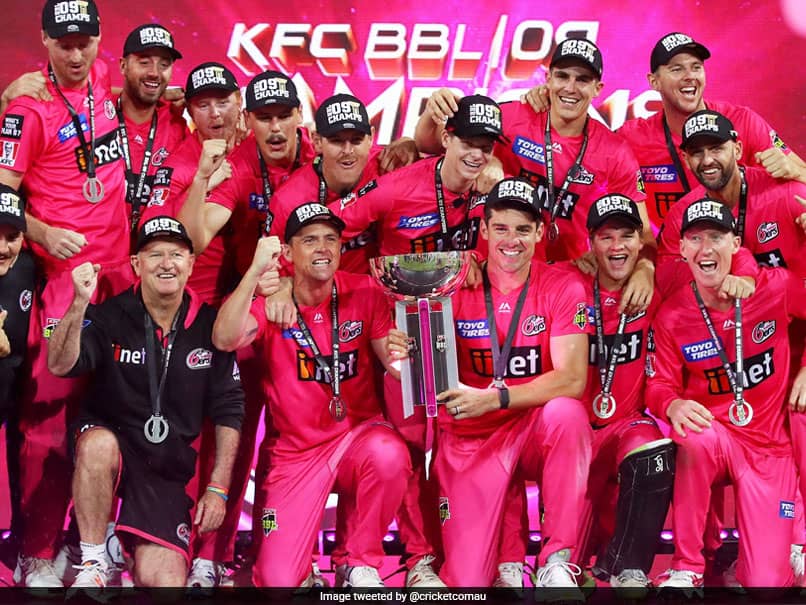 The Sydney Sixers were crowned Big Bash League champions for a second time Saturday after the Melbourne Stars fell short during the run-chase in a rain-affected match that capped a near two-month competition. Chasing 117 to win a game reduced to 12 overs, Glenn Maxwell's Stars could only manage 97 for six as they suffered a second finals defeat in a row after imploding against the Melbourne Renegades last year. "It's fantastic, it was an entertaining game of cricket," said Sixers captain Moises Henriques after the 19-run win at the Sydney Cricket Ground secured their second title and first since the inaugural season in 2011-12.

"The wicket played pretty well after so much rain. Well done to the ground staff and congratulations to the Stars on a great season."

It was remarkable the match went ahead with Sydney drenched by torrential rain for two straight days, which only let up as the final was due to start, with the game getting underway more than an hour late.

Unlike most other Twenty20 events around the world, no finals reserve day is built into the BBL structure which would have meant the Sixers claiming victory as the host team if no play was possible.

Nathan Lyon (2-19) and Steve O'Keefe (2-27) were the pick of the Sixers' bowlers after they made 116 for five in their innings, spearheaded by impressive opener Josh Philippe's 52.

In reply, Marcus Stoinis clubbed a four and a six off Lyon's first three balls to signal the Stars' intentions, but he pushed his luck too far and was caught near the boundary off the fourth delivery.

Fellow opener Nic Maddinson followed in the next over, offering a limp chip shot to Josh Hazlewood which was easily collected by James Vince at cover.

When the potentially explosive Maxwell was out lbw to O'Keefe for five trying to sweep, they were 18 for three and in big trouble.

A comical run out of Peter Handscomb for one, sent back by Nick Larkin as he went for a second run, made matters worse. Ben Dunk was the next out, lbw to Lyon, then Seb Gotch was caught at deep mid-wicket off O'Keefe as he tried to slog a boundary.

Nathan Coulter-Nile (not out 19) and Larkin (not out 38) produced some late fireworks in a last-ditch bid to reel in the Sixers score, but it was too little too late.

"The boys can hold their heads up high, we've had a great year," said Maxwell.

"Unfortunately we let ourselves tonight, but they can be proud. Two finals in a row. We've been extremely consistent. Onwards and upwards to next year."

Sent into bat, the Sixers made a slow start, losing Vince for two in the third over.

That brought Steve Smith to the crease and he hit a boundary from his second ball to get the scoreboard moving. A huge six soon followed before he was caught by Handscomb for 21 going for another one off Maxwell's bowling.

The wickets of Henriques and Daniel Hughes followed as Philippe kept his head at the other end, sharing in a 48-run stand with Jordan Silk.

Philippe was out last ball going for another big hit after bringing up his fifth half-century of the competition, with Silk unbeaten on 27.

It culminated an almost two-month domestic competition, which was filled with memorable moments but reportedly saw a drop in TV viewership along with dwindling crowds.

Starting on December 17, it saw eight franchises play 56 regular season games with five teams making it to the playoffs, ending in Saturday's final.

Steven Smith
Get the latest updates on India vs Australia Series, check out the India vs Australia Schedule for 2020-21 and Ind vs Aus live score . Like us on Facebook or follow us on Twitter for more sports updates. You can also download the NDTV Cricket app for Android or iOS.