Watch: England Cricketer Run-Out In One Of The Unluckiest Dismissals Ever Seen

James Vince, playing for the Sydney Sixers in BBL 2019, will count himself as extremely unlucky after his freak dismissal against the Melbourne Renegades. 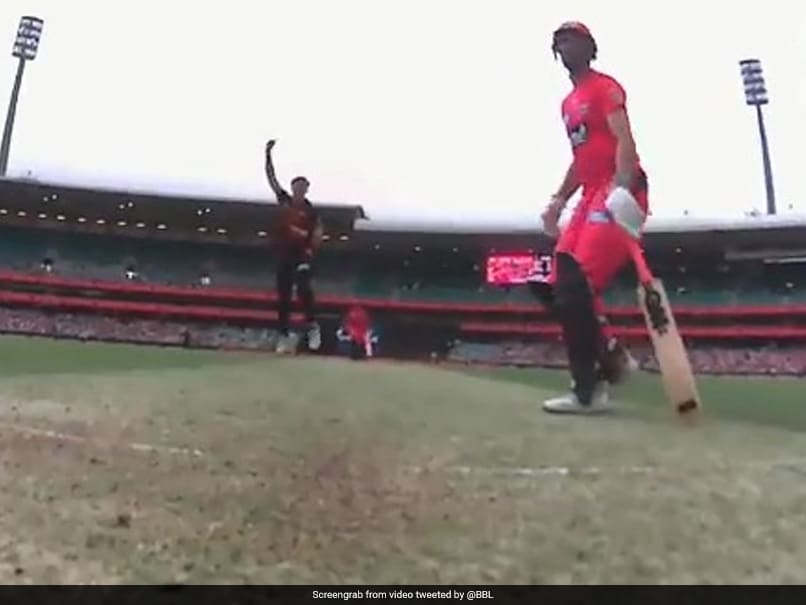 James Vince was run out in a freak dismissal during Sydney Sixers vs Melbourne Renegades BBL match.© Twitter

James Vince, playing for the Sydney Sixers, has not had the best of times in the ongoing Big Bash League (BBL) 2019 but appeared to be finding some form in the last couple of matches. On Saturday, the right-handed opener, who was part of England's victorious World Cup team, once again looked in good touch, racing to 22 off just 13 balls against the Melbourne Renegades. However, the 28-year-old's knock was cut short by one of the unluckiest dismissals ever seen in the sport.

Vince's opening partner, Josh Philippe hit a powerful but lofted drive straight back at the bowler, giving him a chance to take a return catch. But Renegades pacer Will Sutherland failed to grasp it and the ball deflected off his hands and onto the stumps at the non-striker's end.

Vince, who at the time had backed up a little, was found well short of the crease with the umpire immediately giving the 'out' signal, thereby bringing an end to the Englishman's stay at the crease.

The video of the entire dismissal was posted on Twitter by BBL's official handle and it has to be one of the unluckiest ways of getting out in the sport. See for yourself:

Vince has played 13 matches this BBL season so far, scoring a total of 309 runs at an average of 25.75 and a strike-rate of 129.29. But in his last two matches, the England batsman had registered scores of 41 not out and 51, respectively, to signal his return to form.

Vince, though, had to make his way back after scoring 22 with the Sixers chasing 176 for a win against the Renegades.

Fortunately for the Sixers, they had an ace up their sleeve in the chase -- Steve Smith. Returning after his exploits in India in the ODI series, Smith smashed an unbeaten 66 off just 40 balls while Philippe added 61 off 42 ball as the Sydney Sixers overhauled the target in 18.4 overs and seven wickets to spare.