Watch: Josh Inglis Produces "The Most Outrageous Shot Of BBL 10" For Perth Scorchers In Playoff Match

Big Bash League: Josh Inglis slammed 69 runs to help Perth Scorchers set a target of 168 runs vs Sydney Sixers in their ongoing playoff match. His knock included an unbelievable shot in the 17th over, against Ben Dwarshuis. 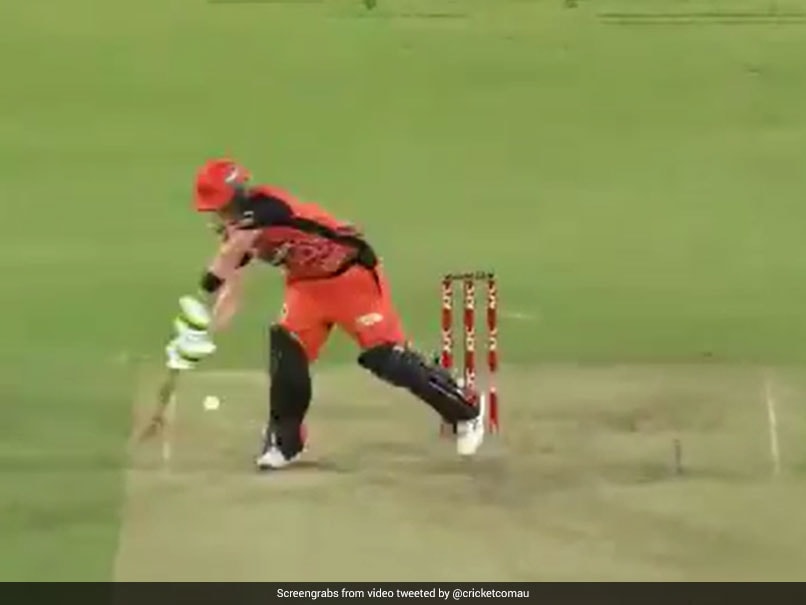 Josh Inglis produced a batting masterclass during Perth Scorchers' ongoing Big Bash League playoff match against Sydney Sixers, slamming an unbeaten knock of 69 runs off 41 balls. The Scorchers set a target of 168 runs, with Inglis playing an "outrageous shot" in the 17th over. Facing a delivery from Ben Dwarshuis, the wicketkeeper-batsman invented a shot, which fans have never seen before. Attempting to ramp a wider delivery, Inglis at the last moment used the back of his bat to flick it for a breathtaking boundary past the opposition wicketkeeper.

Here is the video of the shot:

The commentators were taken aback by the unbelievable shot, and screamed on-air, "OH NO! That is the most outrageous shot of Big Bash 10!"

Dwarshuis didn't really have much of a reply to the shot and walked back grinning to bowl his next delivery. In total, Dwarshuis took two wickets in four overs, and conceded 40 overs.

Fans on Twitter praised Inglis for the shot, with one stating, "We're calling it the backward on drive, everyone. It's final."

We're calling it the backward on drive, everyone. It's final.

Meanwhile, another fan had a hilarious take on it, tweeting, "Don't give Steve Smith any ideas".

A victory for either outfit will send them to the BBL final, meanwhile the losing team will have to play the Challenger, to qualify for the final.

Colin Munro Ashton Turner Cricket
Get the latest updates on ICC Women's Cricket World Cup 2022 and IPL 2022, check out the Schedule , Live Score and IPL Points Table. Like us on Facebook or follow us on Twitter for more sports updates. You can also download the NDTV Cricket app for Android or iOS.