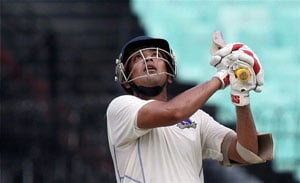 The seam trio of Shami Ahmed, Veer Pratap Singh and Laxmi Shukla shared eight wickets among them as defending champions Bengal crushed Karnataka by 10 wickets to set up a semi-final clash against Delhi in the National One Day Championship for Vijay Hazare Trophy.

Electing to field after winning the toss in the third quarterfinal, Bengal skittled out Karnataka for a paltry 127 runs in 32.1 overs as Shami (3 for 32), Veer Pratap (3 for 40) and Shukla (2 for 20) ripped through their batting line-up at Port Trust Diamond Jubilee Stadium in Visakhapatnam on Thursday.

The Bengal openers, Shreevats Goswami and Wriddhiman Saha, knocked off the target in 28.3 overs to register an emphatic victory. Goswami struck 10 fours and two sixes in his 79-ball 70 while Saha played an ably ally with 93-ball 52.

Comments
Topics mentioned in this article
Cricket Laxmi Shukla Wriddhiman Saha Shreevats Goswami Vinay Kumar Vijay Samuel Hazare BEN
Get the latest updates on ICC Women's Cricket World Cup 2022 and IPL 2022, check out the Schedule , Live Score and IPL Points Table. Like us on Facebook or follow us on Twitter for more sports updates. You can also download the NDTV Cricket app for Android or iOS.