The Windies were reduced to 75 for five at stumps on the the second day, trailing Bangladesh by 433 runs in the first innings. 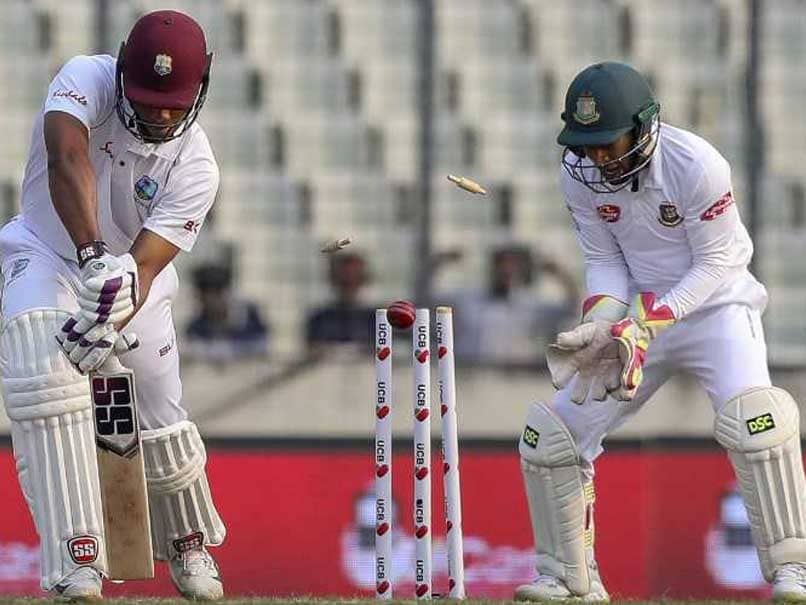 All five Windies batsmen were clean bowled -- only the third time in cricket history.© AFP

Bangladesh spinners took a firm grip on the second Test against the Windies after Mahmudullah Riyad struck a career best 136 to guide the hosts to 508 in the first innings in Dhaka on Saturday. Mehidy Hasan and Shakib Al Hasan shared five wickets between them as the Windies were reduced to 75 for five at stumps on the the second day, trailing the hosts by 433 runs in the first innings. All five West Indies batsmen were clean bowled -- only the third time in cricket history and the first time by spinners as Mehidy finished with 3-36 and Shakib claimed 2-15.

Shimron Hetmyer (32 not out) and Shane Dowrich (17 not out) stemmed the rot to survive the day.

Hetmyer was given out off rookie spinner Nayeem Hasan on 10, but the decision was overturned by television replay.

The West Indies innings were in complete contrast to those of Bangladesh, which saw Shakib (80), Shadman Islam (76) and Liton Das (54) making useful contribution along with Mahmudullah.

Resuming on 259-5, Bangladesh's innings revolved around Mahmudullah, who faced 242 balls and struck 10 fours in his third Test century, on the second day.

Mahmudullah helped Bangladesh build on their overnight score putting on a 111-run with Shakib Al Hasan for the sixth wicket, 92-run with Liton Das for the seventh wicket, and a 56-run with Taijul Islam (36) for the ninth wicket.

Shakib Al Hasan, who resumed on 55 overnight, added 25 to his overnight score before he gave a catch to Hope at gully off Kemar Roach.

Mahmudullah and Liton maintained the pressure, helping the home side add 128 runs in 25 overs of the morning session.

Liton -- who was making a comeback to the side after being dropped in the first Test -- hit Chase a six and a four in one over to bring a quickfire fifty off just 50 balls.

Liton, who struck eight fours and a six in his fourth Test fifty, fell after the lunch break when he attempted a reverse sweep off Brathwaite and missed the line to get bowled.

Mahmudullah faced 29 balls in nervous nineties before he cut Chase for four to bring his hundred.

Warrican bowled Mahmudullah to wrap-up the Bangladesh innings and finish with 2-91, while Roach, Devendra Bishoo and Brathwaite also claimed two wickets each.

Bangladesh are leading the two-Test series 1-0 thanks to their 64-run win in the first Test in Chittagong.

Mahmudullah Bangladesh vs West Indies, 2nd Test Cricket
Get the latest updates on India vs Australia Series, check out the India vs Australia Schedule for 2020-21 and Ind vs Aus live score . Like us on Facebook or follow us on Twitter for more sports updates. You can also download the NDTV Cricket app for Android or iOS.