BAN vs WI: West Indies' Kyle Mayers, on debut, smashed a magnificent 210 not out in the fourth innings as his team chased down 395 runs to win the first Test against Bangladesh. 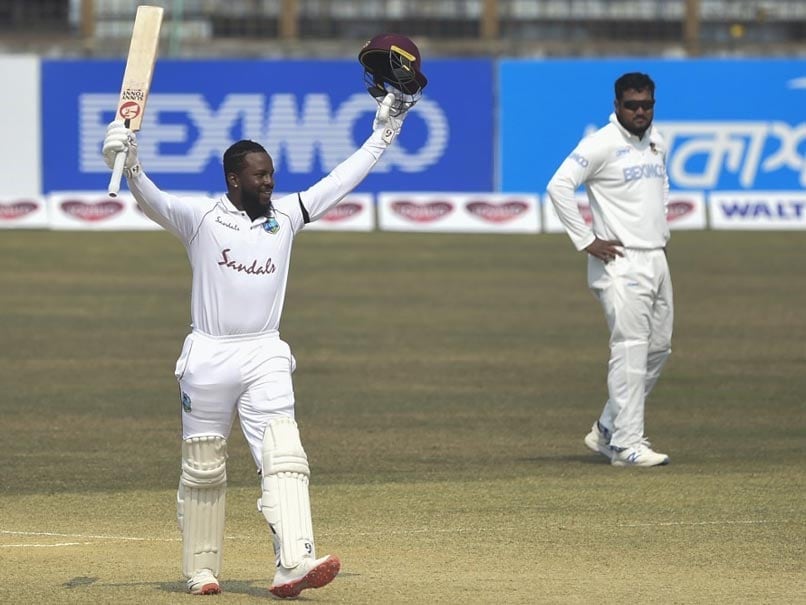 Kyle Mayers hit a double hundred on Test debut as his 210 not out helped West Indies chase 395 runs.© AFP

West Indies' Kyle Mayers had a Test debut to remember and one for the ages as he hit an unbeaten 210 in the fourth innings of the first Test against Bangladesh in Chattogram and helped his side chase down a mammoth 395 runs with three wickets in hand to win the Test in the final session on Day 5. West Indies were in trouble at 59 for 3 at one stage but Mayers teamed up with Nkrumah Bonner to add 216 runs for the fourth wicket to revive the West Indies innings. Mayers brought up his 100 off 178 balls and the double hundred off 303 balls.

Mayers's 210 is the fifth-highest score by a debutant in Tests with the highest being 287 by England's Tip Foster against Australia in 1903.

Mayers finished with 20 fours and seven sixes in his innings as he also owned the record for the highest score by a debutant in the fourth innings of a Test match.

West Indies were behind for most parts of the Test as Bangladesh hit 430 in their first innings before bowling the visitors out for 259.

Bangladesh then declared their second innings on 223 for 8, setting West Indies an improbable 395 runs to win.

And when Mehidy Hasan ran through the West Indies top order dismissing skipper Kraigg Brathwaite for 20, John Campbell for 23 and Shayne Moseley for 12, the visitors were in all sorts of trouble.

However, debutant Mayers and Bonner had other plans as they took the West Indies to Lunch at 197 for 3 and then to Tea at 266 for 3.

The final session saw the West Indies accelerate and go for glory.

Bangladesh Cricket Team Nkrumah Bonner Kyle Mayers Bangladesh vs West Indies, 1st Test Cricket
Get the latest updates on Fifa Worldcup 2022 and check out  Fifa World Cup Schedule, Stats and Live Cricket Score. Like us on Facebook or follow us on Twitter for more sports updates. You can also download the NDTV Cricket app for Android or iOS.