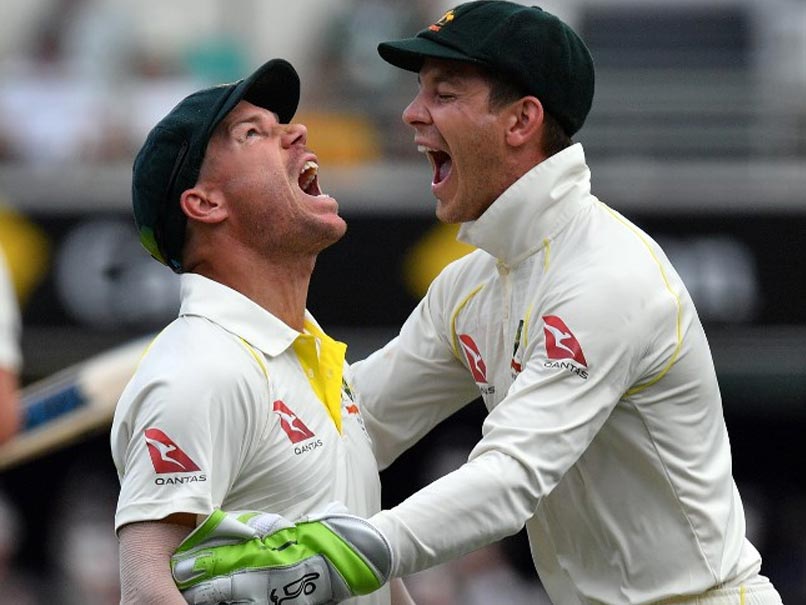 Tim Paine said that David Warner would be welcomed back in the team after the ban.© AFP

Australian skipper Tim Paine Thursday denied David Warner was a divisive figure widely disliked within the team, insisting he would be welcomed back after his ban for a cheating scandal. Disgraced former vice-captain Warner is serving a year-long suspension for his part in the plan to use sandpaper to tamper with the ball during the third Test in South Africa in March. He was considered the mastermind of the scandal that rocked the sport and also saw former captain Steve Smith and batsman Cameron Bancroft suspended.

Respected News Corp cricket writer Robert Craddock this week questioned whether Warner could fit back into a team under the leadership of new coach Justin Langer given "half the players can't stand him".

But Paine said the comments were "off the mark" and "really unfair".

"I certainly like Craddock's writing and when he's on TV I'm a fan of his," Paine told reporters in Hobart in his first press conference since officially being made one-day and Test skipper.

"But I thought he was a little bit off the mark there and really unfair on David Warner as a person and as a cricketer."

He said while Warner's competitiveness might sometimes "rub the opposition up the wrong way," he was well received within the Australian camp.

"Within our team he's someone with that energy and that competitiveness who we love playing with," he said.

"There's a side of David that people don't know which is a really loyal, really caring and a good team man to have around."

Langer, who was appointed this month to replace Darren Lehmann who quit as coach in the wake of the tampering scandal, has said he would welcome Warner back, but only if the meets his behavioural standards.

Paine said he had been in touch with all suspended players.

"All three are certainly going to be welcomed back into our team, if they're prepared to toe the line with our new brand of cricket, which I know they will," he said.

"I know they'll all do the right thing and score enough runs to be back in our side and they'll be certainly be welcomed back."

Speaking to SEN radio this week, Craddock claimed some in the team had contacted Cricket Australia saying they didn't want to play with Warner again.

Comments
Topics mentioned in this article
Australia Cricket Team Tim Paine David Warner Cricket
Get the latest updates on Fifa Worldcup 2022 and check out  Fifa World Cup Schedule, Stats and Live Cricket Score. Like us on Facebook or follow us on Twitter for more sports updates. You can also download the NDTV Cricket app for Android or iOS.