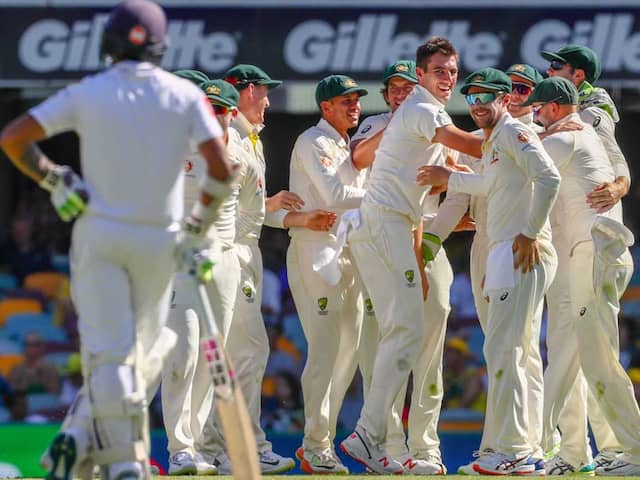 Australia thrashed a disappointing Sri Lanka by an innings and 40 runs in the first day-night Test in Brisbane on Saturday. Led by a brilliant display of fast bowling from Pat Cummins, the Australians dominated a Sri Lankan outfit that never came to terms with the pace and bounce of the Gabba wicket. They made 144 in the first innings and just 139 in the second in reply to Australia's first innings total of 323. Cummins took a career-best 6-23 in the second innings and 10 for the match to lead the Australians to a win inside three days.

He was well-supported by debutant Jhye Richardson, who took 2-19 to go with the 3-26 he claimed in the first innings.

"If Pat bowls like he bowled in this Test match against anyone he's going to take wickets," Australian captain Tim Paine said.

"I thought he was just relentless with his line and length.

"I thought he and Jhye in particular -- their discipline, their ability to just keep hitting the spot and wearing them down was outstanding."

Paine conceded the Sri Lankans went into the match at a disadvantage because of playing at the Gabba, where Australian hasn't lost since 1989.

"It's completely out of their comfort zone," he said.

"It's hard enough for Australians to come from the southern states and play on that wicket with the extra bounce."

After starting their second innings 179 runs behind, the Sri Lankans never looked like making Australia bat a second time when they slumped to 19 for three and 35 for four.

Sri Lankan captain Dinesh Chandimal said the batting was simply not good enough to compete at this level.

"Our batting was below par throughout the game, so that's the one area we'll have to improve," he said.

"If you can't score 300 in an innings it's always tough to beat a team like Australia, especially in Australia."

Cummins exploited the conditions to the full in a superb seven over spell to start the day's play.

The 25-year-old, who dismissed Dimuth Karunaratne on the last ball of the day on Friday, took the first three Sri Lankan wickets to fall in Saturday's opening session.

Cummins was in irresistible form, bowling with great venom and immaculate control.

He snared Dinesh Chandimal for a duck with the second ball of his first over, the Sri Lankan captain edging a ball that leapt off a good length to Kurtis Patterson in the gully.

Kusal Mendis (1) replaced his skipper at the crease but lasted just seven deliveries before he launched an ambitious drive off Cummins, only to edge the ball to Joe Burns at second slip.

The Sri Lankans were in huge trouble at 18 for three but Roshan Silva dug in with opener Lahiru Thirimanne.

The pair took the score to 35 before Silva lost concentration and fell in identical fashion to Mendis, driving at Cummins and edging the ball to Burns, who took a good low catch.

Thirimanne and new batsman Dhananjaya de Silva were far more comfortable against the other Australian bowlers and once Cummins was replaced by a wayward Mitchell Starc, the pressure eased.

But in the second last over before the tea break, Richardson got a fine inswinger to crash through de Silva's defences and take out the off stump.

Cummins struck again soon after the resumption when Thirimanne (32) got the faintest of edges to wicketkeeper Tim Paine.

The Sri Lankan opener reviewed the decision, believing the ball had hit his back arm, however, despite Hot Spot not showing anything on the bat and Snicko indicating a faint spike after the ball had passed the bat, third umpire Michael Gough upheld Marais Erasmus's decision.

Niroshan Dickwella scored an entertaining 24 before he was caught spectacularly at backward square leg by Marcus Harris, before Patterson took an equally good diving catch to snare Dilruwan Perera at gully.

With the injured Lahiru Kumara unable to bat due to a hamstring injury, when Paine stumped Suranga Lakmal for a breezy 24, Australia had claimed an emphatic victory.

Pat Cummins Cricket
Get the latest Cricket news, check out the India cricket schedule, Cricket live score . Like us on Facebook or follow us on Twitter for more sports updates. You can also download the NDTV Cricket app for Android or iOS.