Anil Kumble, in an interaction with Pommie Mbangwa, said that he could never understand why people compared him to Shane Warne. 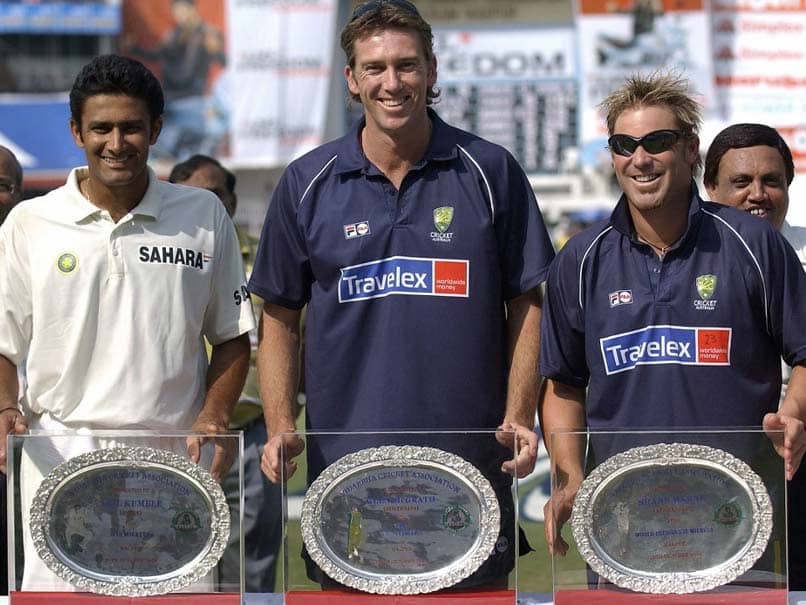 Anil Kumble said Shane Warne was "someone really different" and was on a "different plane" to him.© AFP

Former India spinner Anil Kumble said that he has never understood why people compared him with Australia's Shane Warne. Kumble was doing an Instagram live session with former Zimbabwe pacer Pommie Mbangwa and it was then that the spinner also talked about being the third-highest wicket-taker in Test cricket. "It feels really wonderful to finish with these many wickets. I never bothered about statistics or what my average should be, I wanted to bowl the whole day and be the one to take wickets. To finish as the third-highest wicket-taker in Tests alongside Murali and Warne is very special. All three of us played in the same era, there were a lot of comparisons, I do not know why people compared me with Warne. Warne was someone really different and he was on a different plane," Kumble told Mbangwa during the interaction.

"These two guys could spin the ball on any surface so it became really difficult for me when they started comparing me with Warne and Murali. I learnt a lot by watching them both bowl," he added.

The Indian spinner announced his retirement from international cricket in 2008. He finished with 619 wickets in the longest format of the game.

He has the third-highest number of wickets in Tests, only behind Sri Lanka's Muttiah Muralitharan (800) and Australia's Shane Warne (708).

Kumble is the second bowler in the history of international cricket after England's Jim Laker to take all 10 wickets in an innings of a Test match.

He had achieved the feat against Pakistan in 1999 at the Feroz Shah Kotla Stadium in Delhi. Kumble had bowling figures of 10-74 from 26.3 overs in the second innings of the Test match.

Kumble will be coaching Kings XI Punjab in the Indian Premier League (IPL).

Muttiah Muralitharan Shane Warne Anil Kumble Cricket
Get the latest updates on IPL 2020, check out the IPL Schedule for 2020 and Indian Premier League (IPL) Cricket live score . Like us on Facebook or follow us on Twitter for more sports updates. You can also download the NDTV Cricket app for Android or iOS.