Sangakkara and Sivaramakrishnan were recently elected by a vote of the 10 Test captains, and will serve on the Cricket Committee for a three-year term from 2013-15. 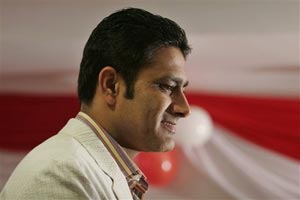 In an appointment that was backed by the BCCI, former India leg-spinner Laxman Sivaramakrishnan on Monday replaced Tim May as a players' representative on the ICC Cricket Committee.

"Sangakkara and Sivaramakrishnan were recently elected by a vote of the 10 Test captains, and will serve on the Cricket Committee for a three-year term from 2013-15," it added.

The appointment was preceded by the head of South Africa's players union's recent allegation that Indian interests have forced a re-vote for the position of players' representative.

Tony Irish, who is also on the Federation of International Cricketers' Associations, had said initial voting for the post by the 10 Test captains had chosen May, who has been a long-term senior players' advocate.

Meanwhile, the ICC further announced that the annual Cricket Committee meeting will take place in London on May 28 and 29.

The committee will be chaired for the first time by former India captain Anil Kumble, who has succeeded ex-West Indies skipper Clive Lloyd.

It will be the first ICC Cricket Committee meeting for Sivaramakrishnan and former England captain Andrew Strauss.

Strauss is one of the two Past Player representatives (replacing Ian Bishop).

The Cricket Committee's remit is to discuss cricket-playing matters and to make recommendations to the ICC Chief Executives' Committee and the ICC Board that will meet at Lord's during the annual conference week, from 25-29 June. The ICC Cricket Committee:

Comments
Topics mentioned in this article
Cricket Kumar Sangakkara Anil Kumble Nathan McCullum Sri Lanka Cricket Team Kings XI Punjab Laxman Sivaramakrishnan
Get the latest updates on ICC T20 Worldcup 2022 and CWG 2022 check out the Schedule, Live Score and Medals Tally. Like us on Facebook or follow us on Twitter for more sports updates. You can also download the NDTV Cricket app for Android or iOS.