Angelo Mathews reached this milestone in the rain-curtalied fourth ODI against South Africa. 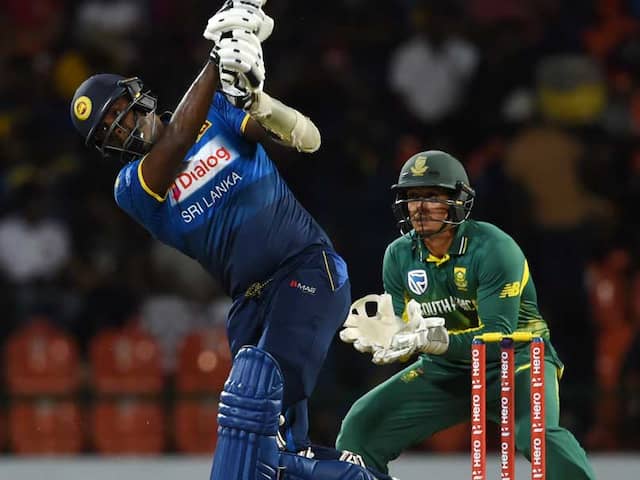 Sri Lanka captain Angelo Mathews on Wednesday played his 200th One-Day International (ODI) match. Mathews reached this milestone in the rain-marred fourth ODI against South Africa at the Pallekele International Cricket Stadium in Pallekele. In doing so, the 31-year-old became the 14th Sri Lankan cricketer to achieve the feat. The International Cricket Council (ICC) also took note of the achievement and said, "MILESTONE FOR MATHEWS! Congratulations to Angelo Mathews on becoming the 14th Sri Lankan to play 200 ODIs. #SLvSA"

In the match, which was reduced to 39 overs, Sri Lanka scored 306/7, after being asked to bat first.

Mathews notched up 22 runs before he fell prey to Lungi Ngidi. His innings was laced with two boundaries and one hit over the fence.

For Sri Lanka, Kusal Perera scored with 51 runs, while Thisara Perera remained unbeaten on a quick-fire 51.

Mathews has scored 5223 runs in ODIs with an average of 42.12, thus far. His highest score remains of an unbeaten 139 runs. On the other hand, he has scalped 114 wickets for the national team, with the best figures of 6/20.

Former opener Mahela Jayawardene (443 ODIs) leads the list among the Sri Lankan cricketers. He is followed by Sanath Jayasuriya, who has 441 caps in the 50-over format to his name.

Kumar Sangakkara (397 matches), Tillakaratne Dilshan (330) are among the other Sri Lankan cricketers in the list.