Watch: Andre Russell Run Out In The Most Bizarre Way Possible In BPL Game 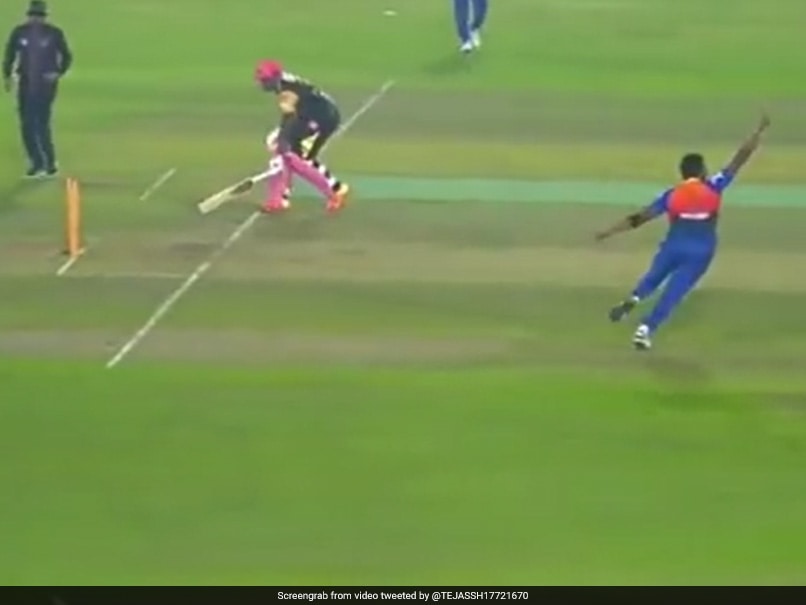 Watch: Andre Russell gets run out in the most bizarre way possible in BPL game.© Twitter

West Indies star Andre Russell was involved in a bizarre dismissal when he lost his wicket after a freak run-out in the ongoing Bangladesh Premier League (BPL) on Friday. Russell was playing for Minister Group Dhaka against Khulna Tigers in a BPL game in Mirpur when the incident took place. Russell played a Thisara Perera delivery towards third man and called Mahmudullah from the other end of the pitch for a run. Mahedi Hasan, who was fielding for Khulna Tigers, immediately grabbed the ball and hit it towards the striker's end. The ball hit the stumps but Mahmudullah reached the crease on time. That was not the end of it, however.

Russell was too late in realising that the ball had changed direction and fell well short of the crease when it hit the stumps. Shell-shocked, he could do nothing but walk back to the pavilion as Khulna Tigers celebrated his wicket. Here is a video of the bizarre dismissal:

https://twitter.com/FanCode/status/1484537942156902400 Khulna Tigers eventually won the game, beating Minister Group Dhaka by five wickets as they chased down the 184-run target with an over to spare.

Former India cricketer Wasim Jaffer termed the incident "unbelievable" and said that he had never seen anything like it.

"I've been playing cricket and watching cricket all my life. Never have I seen something like this. Just unbelievable," Jaffer tweeted.

The video of the incident has since gone viral on Twitter.

Shere Bangla National Stadium, Mirpur
Get the latest updates on Fifa Worldcup 2022 and check out  Fifa World Cup Schedule, Stats and Live Cricket Score. Like us on Facebook or follow us on Twitter for more sports updates. You can also download the NDTV Cricket app for Android or iOS.