Opening batsman Alviro Petersen ground out a century as South Africa battled England's all-pace attack on the first day of the second Test at Headingley on Thursday. 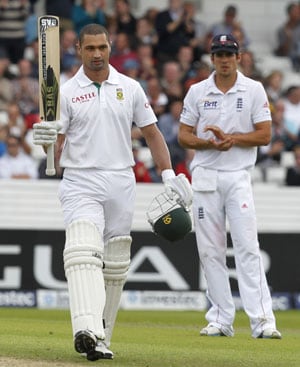 Opening batsman Alviro Petersen ground out a century as South Africa battled England's all-pace attack on the first day of the second Test at Headingley on Thursday.

South Africa reached 262 for five at the close after being sent in to bat. Petersen made 124 not out off 266 balls.

Petersen, who was out for a duck in South Africa's run feast in their innings win in the first Test at the Oval, played an innings of contrasting halves.

He reached 50 off just 78 balls with seven fours, dominating the strike while captain Graeme Smith made only 10, but went on the defensive as South Africa lost three wickets after lunch. It took him another 137 balls to notch his fourth Test century.

On a day of fluctuating fortunes, England had a frustrating morning, which included a dropped catch and fast bowler Steven Finn being denied a wicket when "dead ball" was called after he bumped into the stumps at the bowler's end while delivering the ball.

But England came back strongly after lunch, when clouds rolled in and their bowlers gained some assistance after a largely sunny morning.

After more than ten hours without taking a wicket, England dismissed all three of South Africa's heavy scorers in the first Test in the space of 12.4 overs. But Petersen and AB de Villiers steadied the innings in a painstaking fourth wicket stand of 97 off 199 balls.

The second new ball brought two quick wickets for England, however, as De Villiers was bowled by Stuart Broad and Finn finally had success when he bowled nightwatchman Dale Steyn.

Petersen and captain Graeme Smith put on 120 for the first wicket before Smith flicked Tim Bresnan to backward square leg to be caught for 52.

Hashim Amla, who scored a South African record 311 not out in the first Test, followed soon afterwards, run out for nine after a mix-up with Petersen.

England's third success came when Jacques Kallis was caught low down at second slip by Alastair Cook off James Anderson for 19.

Smith's wicket was the first success for England in six hours and two minutes of play, during which 497 runs were scored, 377 of them in an unbeaten third wicket partnership between Amla and Kallis at the Oval.

South Africa won the first Test by an innings and 12 runs.

Petersen was dropped at second slip off Anderson when he had 29, with Cook putting down a straightforward chance just below waist height. Cook was fielding in the slips because England dropped Graeme Swann, ending a sequence of 43 successive Tests for the off-spinner. Three balls earlier Petersen edged Anderson at catchable height between third slip and gully for four.

In the next over fast bowler Finn, who replaced Swann, was denied a wicket when Smith, on six, edged him to England captain Andrew Strauss at first slip. But umpire Steve Davis had called "dead ball" because Finn broke the stumps at the bowler's end with his right knee.

It was the fourth time Finn's knee made contact with the stumps but the first time the umpire intervened. There were four further "dead ball" calls against Finn, with two of them denying boundaries for Smith.

According to a statement by the MCC, the custodians of the laws, Davis acted correctly in terms of the laws after both batsmen complained that the noise of the stumps being broken at the bowler's end was a distraction.