Off-spinner Akila Dananjaya claimed five wickets in an innings on debut as Sri Lanka beat Bangladesh by 215 runs in the second Test to win the two-Test series 1-0 in Dhaka on Saturday. 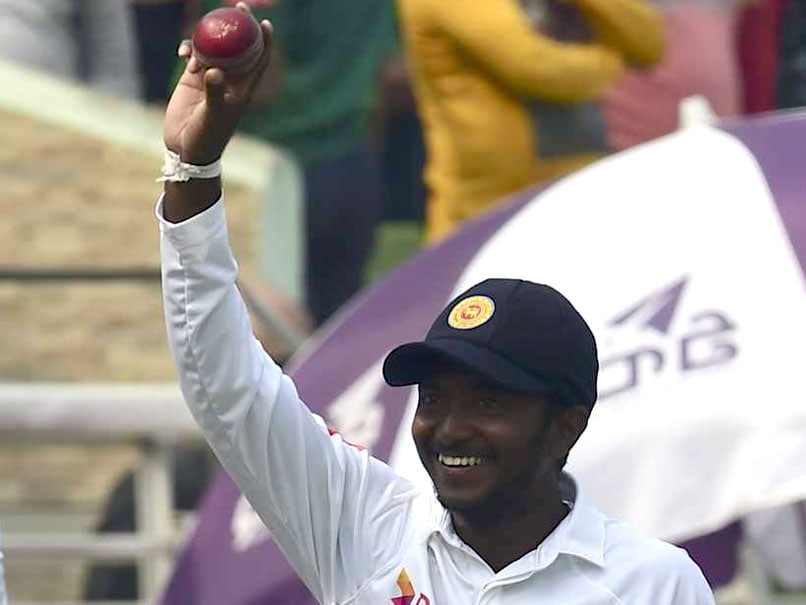 Akila Dananjaya picked up a five-wicket haul in the second innings of the second Test.© AFP

Off-spinner Akila Dananjaya claimed five wickets in an innings on debut as Sri Lanka beat Bangladesh by 215 runs in the second Test to win the two-Test series 1-0 in Dhaka on Saturday. Set a target of 339 runs, a collapse-prone Bangladesh were all out for 123 in 29.3 overs in their second innings in the second session of the third day, without offering much of a challenge. Dananjaya finished with 5-24 to take his match haul to eight wickets while experienced Rangana Herath claimed 4-49.

Sri Lanka bowled out Bangladesh for 110 runs in the first innings to take a 112-run lead after they made 222 runs in their opening innings.

The visitors' victory was never in doubt after they posted 226 runs in their second innings, resuming the third day's play on 200-8.

Roshen Silva remained unbeaten on 70, adding 48 runs with fellow overnight batsman Suranga Lakmal for the ninth wicket to extend their lead on a difficult pitch at the Sher-e-Bangla National Stadium.

Left-arm spinner Taijul Islam bowled Lakmal for 21 to end the partnership before he trapped Herath leg-before off the next ball to wrap up the Sri Lanka innings.

Taijul finished with 4-76 taking his tally to eight wickets in the match but Bangladesh were always in the back foot once they started their second innings on a massively turning wicket.

Sri Lanka began their victory push as Dilruwan Perera removed opener Tamim Iqbal for two in just the second over of the innings.

Herath got rid of Imrul Kayes before the lunch break as wicketkeeper Niroshan Dickwella took a catch, just a ball after he hit the left-arm spinner for a six.

Herath added Mominul Haque (33) and Mushfiqur Rahim (25) too after the lunch break before Dananjaya stepped on to the scene and did the rest.

Silva, who also scored 56 runs in the first innings, was man of the match.

Comments
Topics mentioned in this article
Sri Lanka Cricket Team Bangladesh Cricket Team Akila Dananjaya Rangana Herath Shere Bangla National Stadium, Mirpur Cricket
Get the latest updates on IPL Auction 2023 and check out  IPL 2023 and Live Cricket Score. Like us on Facebook or follow us on Twitter for more sports updates. You can also download the NDTV Cricket app for Android or iOS.