Afghanistan to play T20s and ODIs in Pakistan

The team will be playing over a span of four weeks despite security concerns keeping every other team out, including minnows Bangladesh. 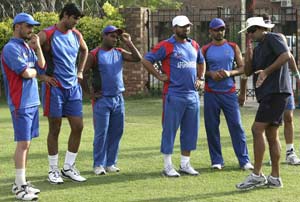 At a time when no test playing nations, including minnows Bangladesh, are willing to visit Pakistan due to security concerns, the Afghan team has reached Lahore for four-week stay during which they will play 12 matches against Pakistan A and other teams.

The Afghanistan team led by Nauroze Mangal and coached by Kabir Khan also held a press conference in Lahore on Monday with Pakistan's former test captain and head of game development at the national academy to outline plans for the tour.

"It is a four weeks program for which the Afghanistan team has come to Pakistan. They will be using our facilities at the national academy and also our coaches, besides playing eight one-day matches and four T20 matches," Intikhab said. He said the Pakistan board was happy to host the Afghanistan side as it bid to try to revive international cricket in Pakistan.

"The good news is that we are also in the process of negotiating with two or three countries to come to Pakistan soon," he said.

The former captain said there was also a proposal to allow Afghanistan to take part regularly in Pakistan's national T20 and One-day competitions so that their players could improve their skills.

"Coming to Pakistan means that our players get to play against tough competition and get quality facilities and coaching at the national academy," coach Kabir Khan, a former Pakistan test bowler, said.

He said the tour was in preparation for the qualifying rounds of the ICC World Cup in March and also a series against Scotland.

"But our main emphasis remains on preparing a strong squad for the T20 World Cup which will be held in 2014. Because it is a brand of cricket that suits our players," he added. Afghanistan captain, Nauroze Mangal said that Pakistan had always supported Afghanistan cricket but the same sort of support was still required from other test playing nations as well.

"Cricket is followed passionately in our country. That is why we are focusing and investing a lot in this sport. We have good talent coming up but we have just two grounds and no academy. That is why we have come to Pakistan," he said

Comments
Topics mentioned in this article
Cricket Nawroz Mangal Pakistan Cricket Team New Zealand Cricket Team Afghanistan
Get the latest updates on ICC Women's Cricket World Cup 2022 and IPL 2022, check out the Schedule , Live Score and IPL Points Table. Like us on Facebook or follow us on Twitter for more sports updates. You can also download the NDTV Cricket app for Android or iOS.