Rashid Khan Set To Return To Sussex For 2021 T20 Blast

Rashid Khan recently passed the impressive milestone of 300 T20 wickets at the age of just 22. 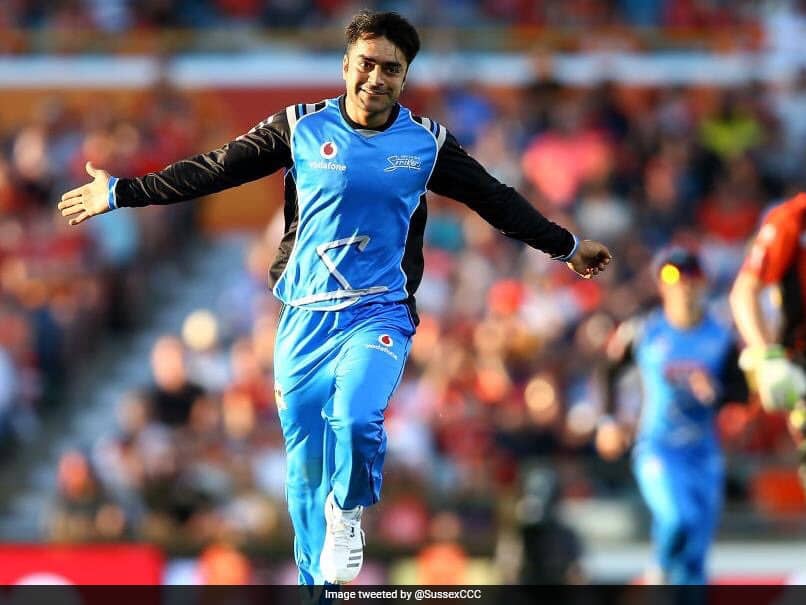 Rashid Khan is the world's number one T20 bowler© Twitter

Sussex Cricket on Monday confirmed that Afghanistan star spinner Rashid Khan will return to county cricket in 2021 to play the T20 Blast. The world's number one T20 bowler has already enjoyed two fantastic summers in Hove after joining the Sharks in 2018. The leg-spinner was set to play for Sharks T20 skipper Luke Wright's side again this year, but it was mutually agreed he would miss the 2020 Vitality Blast due to his overlapping commitments in the Caribbean Premier League and Indian Premier League. "I am really happy to be heading back to Sussex for the 2021 Blast. Ever since my arrival on the South Coast in 2018, it has felt like a home away from home for me. I look forward to seeing everyone in 2021 and really hope we will be back playing in front of our loyal supporters soon," said Rashid in an official statement.

Rashid recently passed the impressive milestone of 300 T20 wickets at the age of just 22 and showed his world-class ability in this year's IPL taking 20 wickets in 16 appearances for Sunrisers Hyderabad at a staggering economy rate of just 5.37 runs per over.

"To secure the services of Rashid next season is amazing. He would be on any team's wish list around the world, so for Sussex to have him playing next year is awesome," said Sussex T20 head coach, James Kirtley

"We endeavour to keep the worldwide profile high of our T20 team and Rashid is one of the best performing and well-known players in the game," he added.

Afghanistan Cricket
Get the latest updates on India vs Australia Series, check out the India vs Australia Schedule for 2020-21 and Ind vs Aus live score . Like us on Facebook or follow us on Twitter for more sports updates. You can also download the NDTV Cricket app for Android or iOS.